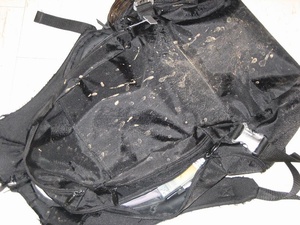 Do you want your back to look like this?

The so-called "Freshman Stripe" is the strip of water/mud/grease which can sometimes be seen on the back of bicycle riders after riding over wet roads or through puddles. This road grime also soils backpacks, though it's easier to clean off than one might expect. It is so-named because naive freshmen tend to forget purchasing fenders when they buy their bikes and absent-minded salespeople at bicycle shops forget to mention they need them. Used bicycles often lack fenders too. This is more an issue of first-time bicycle riders than of freshmen.

In addition to the stripe on your back watch out for water thrown back by your front tire when you turn.

Avoiding puddles is pretty easy to do, so I really haven't had a problem with the stripe despite not having a fender. However, every once in a while during the winter of 05 I encountered a big puddle and forgot to slow down. Lol, safe to say my entire back became soaked with mud and water -PatrickSing

Walking into class with a large brown stain on the back of your jeans is not fun. -MattNagel

When I was a freshman, I found the biggest problem wasn't your own bike, it was everyone else's. I had a fender that worked well to prevent my own stripe....it's the amount of people you bike past or around or even near that get you. Either get side splashed, or whoever's in front tosses it behind them as well. Plays havoc with your pants. End up getting all around muddy, even with a rain jacket. My back however, was always clean. -ES

I think the best thing to do in the rain is just allow extra time, and walk with an umbrella. i find it uncomfortable to bike when your forward movement causes rain to lang on your face. But another thing to do is just not care, perhaps the stripe will be in next winter :) — MattHh

2007-05-10 14:03:16   If you need big poncho's (raincovers) that you can wear with a backpack, check out http://www.jeantex.com It's a german company with First Class bike (and sail) clothing and goodies. I have been testing the Jeantex Bergerac jacket on my bicycles (I am car-less as well, but I live in NL) for over 6 months and it outperforms my North Face clothes by orders of magnitude. And jeantex is dirt cheap. Nice site! —JanVerhoeven

2009-02-19 17:49:27   Just a note on my edit of this page. First, thanks to the original author. It's a great page. But the previous description that bike store salespeople "trick" freshmen or beginning bikers to purchase bikes without fenders isn't just erroneous but foolhardy. It's erroneous because it just isn't true. It's foolhardy because if you actually walk into a bike store to purchase a bike you'll find that sales associate are adamant you purchase fenders ... and for good reason! It's something else you purchase from them. Plus, the margins retailers make on accessories, like fenders, is around 40-50%, whereas the margins they make on the bikes is almost nil. There are very few bike shops in town that will let you walk out of the store without encouraging you to purchase fenders. The freshman stripe is more often the result of someone purchasing a used bike, bringing a bike from a home, or refusing to pay for fenders after the sticker shock of the new bike. —condemned2bfree