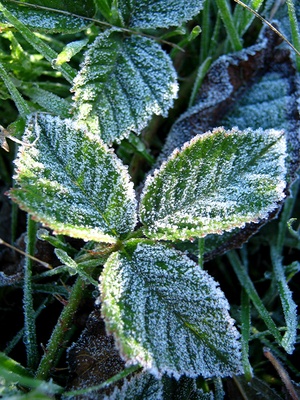 While our normal date of first frost is around Thanksgiving, light frost has been reported some years in outlying areas as early as Nov. 13 - 14, and heavy frost was recorded on Nov. 15, 2000. In 2010, the sub-freezing temperatures came right on schedule, around Thanksgiving.

But don't get too worried. While a normal frost will kill off summer annuals or nip the new growth on some subtropical plants, most can sustain 31 - 32F with little damage. Snow might pose a bigger challenge, however.

How does frost occur?

Frosts occur on still, clear nights. Heat from the ground radiates to the sky, and the surface becomes colder and colder. When the surface reaches the freezing point, the layer of water vapor just in contact with the surface freezes into ice, and then the next layer above that, and so on. Frost develops earlier in the evening on your car, because metal and glass lose heat more rapidly than soil. Fog or cloud cover usually will prevent a frost by trapping the heat that otherwise would radiate out to the open sky.

Frost is a local condition which occurs in your area on a still night, temperatures usually go no lower than 29-30 degrees F, and it warms up again the next day. A freeze involves an entire region, has significantly lower temperatures, and may last from several days to a couple of weeks . In the event of a major regional freeze such as we experienced in 1990 and 1998, our efforts turn away from saving fruit/foliage/flowers and we focus on simply trying to keep the plants alive. Draping with blankets, wrapping the trunks with burlap, flooding with water ... all of these are extreme measures we rarely need to take here. We can be thankful for the rarity of such severe weather events.

How can I protect plants from frost?

Protecting plants from frost damage usually is accomplished by trapping the heat that is radiating from the ground with clear plastic or similar materials, by moving the plant to a sheltered location, or by directly providing heat via light bulbs. Additionally, anti-transpirant sprays — Cloud Cover is one brand — will provide a couple of degrees of protection if applied at least a few hours before you expect frost. Each measure gives about two to three degrees of protection, so try them all on a tender plant you value. Keeping plants well-watered is important in freezing weather. While we've had enough rainfall for plants in the ground, container plants are especially vulnerable to the desiccating effects of freezing.

How much effort should you put into frost protection? Sometimes it's a pretty simple cost-benefit analysis. One customer's landscaper planted eight five-gallon tropical Hibiscus rosa-sinensis in her new landscape. While lights may not be an option for her, a combination of anti-transpirants and seedling blankets may get them through until spring, and the $20 investment might save $200 worth of plants.

Which plants are likely to be damaged?

Plants always killed by frost include your summer annual flowers and vegetables: Impatiens, Coleus, marigolds, tomatoes and peppers. There's no point in trying to protect these; simply replace them next spring. Any house plants that have been growing outdoors need to be brought inside—by Hallowe'en as a good rule of thumb. Check them first for aphids, ants, or other pests; to make sure you don't include any uninvited guests. A quick spray with a soap solution can prevent unpleasant surprises!

Subtropical plants will be damaged if they aren't protected, and may be killed. These include Bougainvillea, Hibiscus, and some of the tender jasmines. Most of these are best grown in containers so they can be moved to a protected microclimate, such as an east or south-facing wall, preferably with an overhang; this traps heat, and both exposures warm up earliest in the morning. If such plants are to be planted in the ground, east/south exposures provide the best chance of survival from year to year.

Covering these plants with plastic or "floating row cover" (a light fabric, sometimes sold as "seedling blanket") can make a big difference. If plastic touches the leaves, each point of contact will freeze, so it's better to make a light frame and staple the plastic to that ... but don't worry too much about it. (You're trying to keep the plant alive, not looking perfect!) The latter material is lightweight enough that you can simply drape it over the plant, but it will need to be secured against even light winds.

While most cactus are cold-hardy outdoors in this area, many succulents will be damaged or killed, including Crassulas (Jade plants), Kalanchoes, some Aloes, and many Euphorbias. The water in the succulent stems and leaves can crystallize, expanding dramatically, and the plant bursts ... and then turns to mush. This is interesting to watch, but very bad for the plant; they are safest indoors for the winter.

Many subtropical plants will sustain severe damage to the leaves and stems, but will resprout in the spring and thus need no protection. Lantana, Tecomaria, Passiflora vines, and Purple potato vine are good examples. They look bad, but will recover. Wait until all danger of frost is past in the spring, before you cut them back.

Citrus trees are a special case!

Limes and lemons are the most tender, and the fruit may be damaged at about 26 degrees F. But avoid harvesting it all if you can, because Citrus fruit doesn't store well, and doesn't get any sweeter once it's picked. Fruit on outer branches is more exposed and is worth picking; fruit inside the tree is more protected, and usually can be left. Draping the plants with "floating row cover" can provide enough protection to save the fruit, and stringing Christmas lights on the trees — the big ones, not the little twinkle lights, and certainly not LEDs — can save foliage and twigs from severe damage.

Plants that love the winter!

Some plants love winter, which enable us to have flowers in our garden all year. Pansies, violas, snapdragons, and ornamental cabbage and kale laugh off the frost and provide us with color in the gloomiest months. Cyclamen is especially bright and rewarding; it's a bulb that blooms in bright red, white, pink, and lavender tones throughout the winter and early spring. Most Cyclamen have little scent, but an occasional plant has flowers with a strong sweet lemon fragrance. All can be planted even during freezing weather.

original of this article 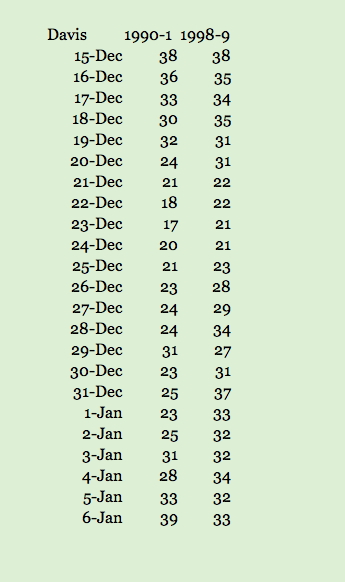 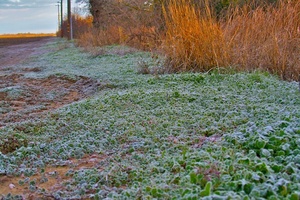 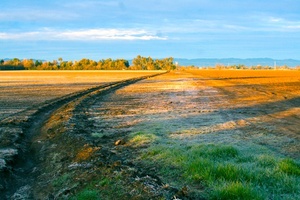 2010-11-26 20:29:35   I remember seeing frost often in West Davis parks when I would deliver newspapers on Sunday mornings. Sometimes I rode across the park and the track of my bike was clear. The frosty mornings were so pretty, I wish I had a picture of that. —NickSchmalenberger