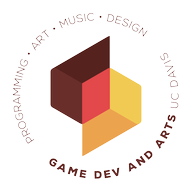 The Game Development & Arts Club @ UC Davis (GDAC) is both an official club and a committee of the Computer Science Club. GDAC encourages students interested in all disciplines of game development to participate. Our projects and events guide students to integrate their disciplines into game design and provide teachings and opportunities in the field.

A strong misconception students have of game development is that in order to be a game developer, you must have exceptional coding skills. While coding is a significant framework of presenting concepts into a working prototype, it is not uncommon for members to have never coded prior to joining the club. Musicians, artists, game hobbyists, writers, and other enthusiasts are equally crucial to the development process. As of 2016, roughly 50% of members are Computer Science (or related) majors; The Game Development and Arts Club is working hard to balance out this 'other' fifty percent, as a diverse skilled body is imperative to the success of a project.

The Workflow of GDAC

Regular meetings are always held weekly. The club does not run on a linear schedule where each meeting is strictly built upon the material from previous discussions, so members may jump in anytime throughout the year. The first 3 meetings of Fall Quarter are heavy with information, laying the groundwork for the remaining quarters of the school year. The first part of meetings cover the most important material regarding upcoming events and deadlines. During this time, members may share their game updates, announcements, or pitch ideas to prospective teammates. Typically, the remainder of the meeting is open to casual discussion, allowing members to collaborate on projects and discuss hobbyist's hot topics. Some students socialize, some play board/console games, some develop games, and some ask for help about development. Usually pizza is always delivered for $5 each person for a quick dinner. The rooms are huge (with a capacity of roughly 100 people), so there is plenty of space to do your own activities.

Game Jams, much like a Hackathon but for games, are held once or twice a quarter (usually during the 2nd or 3rd week of a quarter). Admission is free. A theme is announced at the beginning of the Game Jam, and participants have 12 hours to team up and create a game from scratch. No coding background is necessary to participate, as plenty of "newbie" groups have won without a single idea how game development works when stepping in the door. Prizes for top 3 teams are usually gift cards to each member, but professors have donated Xbox Controllers and Steam Games before. As GDAC continues to grow, they will search for more sponsors and ways to diversify the prize pool for future events.

The club also participates in larger Game Jams such as Global Game Jam, which is a 72 - hour competition with over thousands of teams across the globe. GameCamp! Game Jams are hosted by members of ModLab yearly, and the top prizes are usually worth thousands of dollars.

Workshops for specific disciplines are usually held throughout the year (usually in beginning and middle of a quarter) - Unity, GameMaker, and Unreal Engine (top 3 game engines). Blender, Maya, 3DS Max (3D Modeling). Analog/Board games, game design. If you don't know which to start with, this powerpoint is a great guide to the complete beginner telling you what Game Dev is.

The club will also be bringing in guest speakers to talk about practical applications in the game development industry.

Picnic Day and IndieCade Sacramento usually happen during Winter Quarter and hundreds of local people come try out their games. Usually it is the goal for many students to complete a fundamentally viable game. The club also has Demo Days, which is held at the end of each quarter to showcase everyone's progress and have people play test each other's games.

Many organizations and professors send in projects to work on, and many of these projects are paid in money or university credits. A couple of students have been hired by local game companies, companies in bay area (like Electronic Arts), and even companies overseas in Japan. Some have gone and created their own studio, such as Dissonent

The club is still looking for applicants for officer positions! Besides the major positions, student can self-title their expertise as a position (i.e. Head of Music/Composer, Head of 2D Artists, etc.)

Game Dev & Arts Club started as a Committee under Davis Computer Science Club (DCSC) during 2014 of Spring Quarter. Since then, it has grown into a huge committee which needed its own official club for publicity, so Game Dev & Arts Club was created during 2016 of Fall Quarter. The committee still exists in DCSC, as the club's mission statement and goals have not changed. It will continue to be part of DSCS as long as it exists.

The club also has a long history with ModLab, an experimental laboratory for media research and digital humanities. They are mostly consisting of professors and graduate students, and they have often offered the club internships for their projects. Both members often join each other's Game Jam events and workshops.

The club also collaborates with International Game Developers Association, Sacramento Chapter (IGDA) in their talks and events, which consists of game developers who have already worked in the industry for some time.

The club also works closely with a few TCS professors, as a few of their courses relate to Game Development (TCS 130: 3D Modeling, TCS 110: Unity, etc) The club lives and breathes in Kemper Hall 1127 & 1131 (a large connected room) since its creation, but when the rooms were remodled during Fall 2016, the meetings moved to Art Annex 107. Since then, Art Annex 107 has been used for weekly meetings while Kemper Hall has been used for workshops.