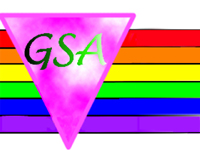 Gay-Straight Alliance is a national organization, with chapters in high schools across the country. It offers gay students and straight students to interact with one another, with the purpose of creating tolerance and understanding within both groups. It's an important part of the gay community.

Sometimes it is shortened to G.S.A., which is not to be confused with the GSA (Graduate Student Association).

The Grad Student Association should totally adopt that as their logo. Really. —BrentLaabs

You know the G.S.A. was originally started at Klein High School which is about 25 miles from where I lived in Texas. The girl who wanted to start it up was told she couldn't by her school district so she sued and won. Now they're everywhere, even at my old high school which was/is über conservative. ~NathanielJarrett