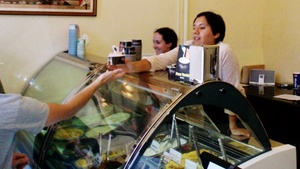 Icekrimski Cafe specializes in Gelato, but is not the only place to find it

Gelato (Italian for "frozen") is Italian style ice cream, different from American style because it is not whipped with air, as ice cream is. Gelato is also made with proportionally less cream than whole milk, so it has less butterfat than ice cream. Because gelato in the United States is usually a gourmet food, it tends to be smoother and denser than average ice cream (just like gourmet American style ice cream). When gelato is made poorly it tends to be hard and full of ice crystals. When it is made well, it is smooth and light — a fine dessert.

2007-10-03 19:56:22   Icekrimski is too expensive. Especially if you want to eat in the theatre. It's got more flavors, but that's all it has going for it. Zia's is nice, cheaper, and goes great after a sandwich on a nice sunny day. Konditorei gives you the most for your money by far, in a large glass. —EdWins

But Zia's closes very early. I'm usually looking for a post-dinner dessert, and Zia's is no help there. Same with Konditorei —CovertProfessor