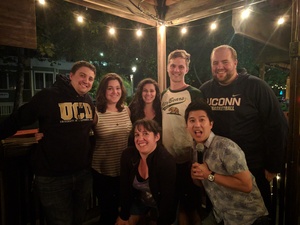 The Gen Y Booers began on the Davis Trivia Circuit in Summer 2014. Early members included Ben (AKA "The Captain") and his coworkers from the Foley Laboratory in Infectious Disease Ecology, inner tube water polo teammates from Mr. Polo Dolo, and softball teammates from the City Bears. After tolerating trivia at de Vere's Irish Pub for a few weeks, the incipient gang of coworkers and teammates played their first game at Sophia's on July 29, 2014. Recognizing the Kevin Wan brand of trivia superior to the competition [citation needed], the team has been participating weekly for almost three years.

Later in 2014, Ben implemented a moneyball trivia recruiting strategy. As such, the team added regular members including anagram wizard and very manly Muppet Justin, that's-so-Claire, man of action Chris, Ravers, and Poppa Shua. During Ravers' pregnancy in 2015, they were the team that kindly asked smokers to relocate from the patio. Through the following years regular members of the team included Sarah, who knows fish [citation needed], Steve, Esq., and Marielle, who has imdb.com largely memorized [citation needed].

The team's name arose out of protest. Early in the team's run, a hodgepodge question asked for the name of the generation born between the 1980s and early 2000s. The team correctly answered "Generation Y" since Wikipedia, the only source ever used, equates the term with "Millennials." However, Kevin only accepted "Millennials" as the correct answer and was soundly booed by all members of the team, despite winning first place [dangling modifier].

After two unsuccessful tries to tie the record of four consecutive wins held by Canadian Softwood, the team recorded their fourth consecutive win on October 18, 2016. The hot streak continued with victories on October 25 and November 1. On November 8, 2016 not much else was going on in the world [citation needed], so it shall be remembered as the day when a heavy favorite with momentum saw the wheels come off and lost in shocking defeat. No one saw it coming, and tears were shed across America [citation needed]. Thus, the streak ended at six, a mark that may never be eclipsed.

Members that contributed to the streak include: Ben (sports encyclopedias dedicated to memory), Justin (beautiful minds every anagram), Claire (knowledge of all things pretentious), Chris (always drinks his contribution), Marielle (nerd-cons embodied), Sarah (a Jewess that knew the least about Judaism but most about fish), Adele (queen of Twister), and Steve Esq. (only kind of knows law). In the six games the team scored a total of 264 points.

The Gen Y Booers are largely unrivaled, however The Mathletes often would pretend to know more about the world than mathematics. The Booers accepted the Mathletes as their rivals, mostly out of pity.

A team, hereby dubbed "Kyle's Team", also had aspirations to be a rival. However, they have not won enough to even have a page on Davis Wiki.

The best trivia question of all time was in the category, Movies in Other Words [citation needed]. A definition is provided that is also the name of a movie. The year of the movie's release is also provided.

We suggest all teams use this question to vet new players.