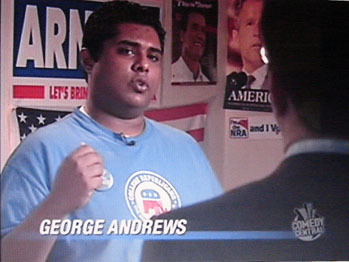 George Andrews was the Former Chairman/Vice-Chairman of the Davis College Republicans. He graduated as a Political Science and History double-major. His hometown is South San Francisco, CA. Andrews is also an Alumni of Alpha Gamma Omega, the Christian Fraternity at UC Davis. In December 2006, George was hired as the executive director of Republican Party of Orange County. He'll soon be leaving that position for a job as an Assembly staffer.

George is not a terrorist.

Andrews was interviewed on The Daily Show regarding "Conservative Coming Out Day", a DCR event which was scheduled during Davis' Gay Pride Week. The videoclip is at this link: Daily Show Interview. There is a transcript of the interview. He was also the key to getting the Davis College Republicans support for L.E.A.D. Executive Office candidates Caliph Assagai and Darnell Holloway in Winter 2005 ASUCD election.

2005-03-11 02:03:54   George is a good guy and easy to get along with, despite the fact I disagree with him on a huge number of issues. There is one thing we agree on: politics is fun. You win some and you lose some, but you always enjoy what you do. —BrentLaabs

it's just so bittersweet and awesome —StevenDaubert