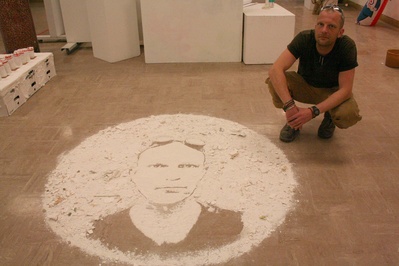 Gilbert and a plaster dust portrait of himself created by artist Ryan Bulis Gilbert Menke is a Davis native and UC Davis alumnus and was the shop tech/Sculpture Yard master at the Art Building. He could be recognized by his black t-shirts, lumberjack boots, metal jewelry (made by the man himself), khaki cargo pants, and the work goggles he often wore on his signature shaved head,

He is skilled in metalwork, woodwork, machinery, and general handiwork, and was always willing to guide students in using the tools and machines necessary to accomplish what they envisioned. He is the creator of Tree Davis's leaf emblem sculpture located on the southeast corner of Second and D streets in Downtown Davis. The sculpture and the Tree Davis Treewalk of which it is a part received an award from the California Urban Forests Council at the CAUFC 2007 Conference in San Francisco.

In days of yore, Gilbert worked as a barista at the E St Cafe Roma, as a Volvo mechanic, blacksmith's assistant, precision machinist, a UC Davis Craft Center welding instructor, and an arborist for a tree-cutting service. He moved to McKinleyville, CA in 2013 and then to Marlborough, NH, where he lived for two and a half years before his untimely death in a workplace accident on July 13, 2016. He leaves behind a longterm partner, daughter, and a legion of friends and fans who were fortunate to have his spirit, intelligence, and sardonic humor enrich their lives.One of the sources