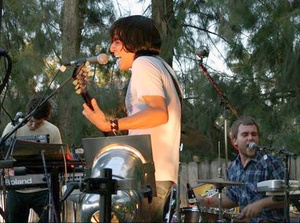 Gonzalo performing with Boss the Big BitGonzalo Eyzaguirre was student at UCD and a member of the local music acts Boss the Big Bit, GnarToon, and GSquared. He was a frequent show attendee as well, often spotted at venues like Delta of Venus and Sophia's. He was a layout artist, then assistant design director, then design director at The California Aggie. He was involved with the on-campus group Robotmedia. He has directed music videos for local music acts such as the Gentleman Surfer and Pregnant. He is often associated with the 2004-2007 Davis era.