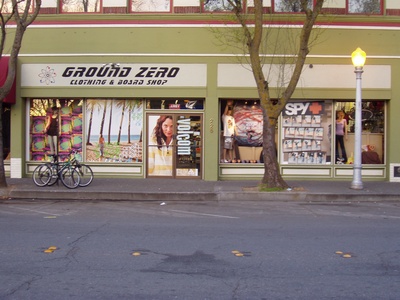 Ground Zero Clothing and Boardshop sells skateboard and snowboard equipment, men's and women's clothing and accessories. This is a local chain owned and operated by people who ride. Ground Zero guarantees the lowest price or they will beat it. That goes for any shop worldwide or online, and if Ground Zero doesn't have it, they will order it.

The genesis of the store is amusing: "When Davis sports shop Ground Zero hangs a portrait of its founder on the wall, the painting may well receive an "R" rating. That's because owner Seth Sternin, who was 21 at the time, was arrested after streaking an Aggies vs. Hornets game and ordered to pay a fine. To raise the money, Sternin created commemorative T-shirts, which he dubbed "Streakwear." The shirts sold well, and noting there were no stores in Davis that catered to the younger crowd, Sternin and two other friends opened Ground Zero, a snowboard, skateboard, shoe, bikini and clothing store that's now the No. 1 skate shop in Yolo County." (from UCDavis Magazine)

There are three other stores in the Sacramento area. One is located in Sacramento at the corner of Howe & Arden, in Natomas on North Freeway Blvd, and the other is in Roseville at Eureka and Taylor rds behind In & Out.

Since opening in 1997, Ground Zero has put on at least one competition to support skating in Davis each year, as well as having contributed funds towards the creation of a good skateboarding park in Sacramento. Those funds went to SSA (Sacramento Skatepark Advocates) and helped create both Granite Skatepark near Power Inn Rd in Sacramento and Tanzanite Skatepark in Natomas.

The shop is located in the Masonic Lodge complex that dates back to 1916. Prior to Ground Zero, there was a book store in this location called The Next Chapter.

Ground Zero left Davis in June 2015 because of rent increases.

Ground Zero rents out gear, too. Call for rates. 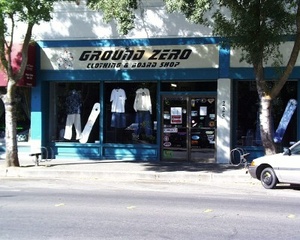 2010-04-14 23:56:34   I think that the guys who work here are really chill and are never on my nuts. As a sneaker fiend, I know exactly what I'm looking for. Everytime I walk in I go straight to the back on the shoe wall. I might pass a girl who tells me about their sale on shirts, but once I get to the back there is just a guy behind the skate counter who will chat with me and bring me something if I ask him too. I was also surprised to learn that they have a quickstrike account. —KingHippo

2010-04-24 13:46:36   Just called them up to ask if they sold longboard bushings. They didn't have venoms, but the girl on the phone was really nice and helpful, and gave me a list of other brands they sold. They said they could test fit them on my randals so I could try them out. Better than another shop I called who basically said, we don't really sell bushings, and we're pretty sure they won't fit, bye. So IMO, this shop seems pretty good and pretty legit. I'll be going there on Sunday when I go back to Davis. —ShishirRao

2010-07-21 12:27:08   Definitely the best place to go in Davis when trying to go buy snowboard gear. The entire GroundZero chain, with it's stores throughout the Sacramento area, is probably the best place to go to when looking for snow gear, save for maybe Boards n Motion in Auburn, but for Davis you can't go wrong. They definitely help the community out with their big movie premieres at the start of the season, and genuinely care about it. They carry some of the more "core" brands, so it's nice to be able to go into a store and get it, rather than buying sight unseen on the internet.

2010-10-24 16:40:00   Okay so I am extremely unsatisfied with a recent transaction with this shop. After purchasing a pair of pants that did not fit well and attempting to return them 5 days later for "store credit" mind you I was denied. I am not sure what the short kid with a lisp name is, although he just turned away a customer who has pumped well over a thousand dollars into this business in the last 6 months and 2,000 since I have moved to Davis. After arriving at the store with the pair of pants and a receipt dated 5 days before this visit he informed me that he does not know if he could resale the pants because I did not have the tag with them that could easily be reproduced. The pants were tried on and never worn which was clearly obvious and it took this kid approximately 25 minutes to go check out the same pair of jeans (recently carried, they were not here 2 weeks beforehand) located on the front display only to turn me away. I have never attempted to return anything here but it is clear that they are not about the customer. The employees here are only looking out for themselves because I am assuming that a) he may have had a commission or some sort of benefit by turning me away, or b)is an owner and didnt realize I was asking for store credit and not my money back. Good luck in trying to return anything here. This business has just lost a valuable customer and will now look into FTC as other users have recommended. Every other employee here has been extremely helpful and professional. I would also like to add that in previous visits to purchase things this kid will follow you around when shopping as if you are going to steal something. He is only helpful when you are pulling out your debit card which I have done faithfully almost every week as other employees can verify. I am extremely unhappy and disappointed because I really like the line of products that are carried here. [edit] I would also like to point out that all other employees here are extremely friendly and helpful and generally care about the customer. This place would get by fine with one less employee. Note: If you happen to read this and happen to be the guy in question: not every customer is looking on getting over on you and your business. Furthermore I feel that you should follow procedures that are printed on the receipt and you will do fine in your future career here at ground zero. —RandyS

- Randy, thank you for your review and I apologize for your experience. I spoke to sales associate about the details of this transaction. He did follow the return policy which is posted very largely at the register. It states that any returns or exchanges must have the tags attached and be in new condition. The associate you spoke with noticed there were no tags and felt the pants may have been washed as they appeared to be faded and not crisp after he compared them to new ones. In this case, he felt the item could not be sold as new. He also noted that he spent awhile on your return because he was trying to give you the benefit of the doubt and take extra care in comparing items. However, I am willing to take a look at the item. I'm not sure of the best way to reach people on this site, but please bring them to GZ to my attention, ask for a manager, and they will discuss it with me. As for the return policy, vendor tags cannot be reproduced, as they come from the vendor and not us, and when items are returned without them they often cannot be sold as new. - Brendan

2011-04-15 22:58:22   Let me start by saying I love ground zero the people that work there are extremely friendly and helpful and I consider them friends although I have only known one of them outside of the store. But I went there to buy an outfit for picnic day spent 150 dollars on the spot for a hat some jeans and a shirt now the shirt and jeans have no problem with but the hat was in the wrong size so the were transferring one from another store I was guaranteed it would be there no later then 2 pm on 4/15 and I bought the hat on 4/12 it was being transferee from a store in natomas whichever is not far from Davis but when I went to get it the hat wasn't there so the employees called the other store and the person who was suppose to have picked it up but the hat is no where to be found not in either stores on with the transfer person now I bought this outfit had other items overnighted to be received so I could have them for 4/16 all in all I spent just under 300 dollars and I didn't get the hat that I was guaranteed. I paid for it with the thought I would have it and then it disappears I find this very unexceptable being a consumer and paying top dollar for an item and I feel something wasn't done right and that the situation should be rectified by the person at fault. Now once again to the people at the store in Davis I appreciate all he help you did all that you could in my opinion and in no way at fault but to whoever did make this mistake I would like some kind of explanation cause its inexcusable. —reneholmes

I would like to add that the situation has been rectified I received a call this morn saying the hat has been found and is at the store waiting for me to come pick it up this is great news and the best way to start picnic day 2011 thank you ground zero see you soon.

2015-09-25 14:00:52   Best place in town for an avid snowboarder like myself! The owners are awesome people who also went to UCD! Support your local boardshop! —tknelson