Gunrock is the name of the official blue horse-based school mascot of UC Davis. It frequently makes appearances at UC Davis sporting events, acting as the face of UCD Athletics.

Students have described it as "an evil trollish looking thing." Others have called it "a giddy cow in a horse's costume." It stands in as mascot at UCD sports games, as we have yet to discover specifically what an ''aggie'' really is. 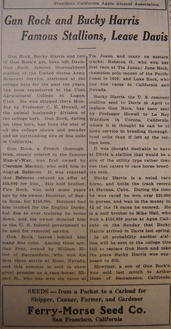 Gunrock the stallion is reassigned to Utah. (courtesy California Aggie) 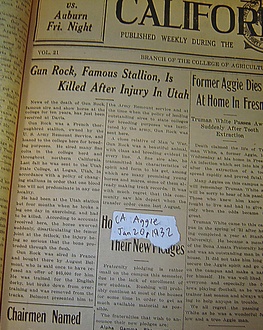 Gunrock broke his leg, and had to be put down, shortly after leaving Davis. (courtesy California Aggie) For a long time there was just the loose concept of the Mustang representing the school, and UC Davis was therefore without an actual costumed mascot for many decades until 2003 when a blue mustang came trotting onto the campus. He took on the name Gunrock after an online internet poll showed that the UCD community overwhelmingly supported this appellation.

But where did the name "Gunrock" come from?

Gunrock is a very important name in the history of UC Davis, according to UCD Sports Information and Aggie Pack. In the 1920's, the efforts of choosing a school mascot led many Cal Davis University Farm students to consider their agricultural and veterinary school roots. Eventually, they chose the glorious mustang... a strong-willed, enduring, intelligent beast exhibiting exactly 1 horsepower of strapping vigor.

But what of the name?

In the 1920's, the University Farm was also used as a breeding facility for supplying high-quality stock thoroughbreds for the United States Army Remount Service. Around this time of mascot name-calling, a thoroughbred named Gun Rock was brought to the campus for the Army breeding program. The offspring of Triple Crown winner Rock Sand and race mare Gunfire, it turns out that Gun Rock was a relative of the famed racehorse, Man o' War, and coincidentally, was also a relative of another famous racehorse named Sea Biscuit, re-popularized by the 2003 Summer-hit movie of the same name.

In honor of this handsome creature, the students of the 20's chose Gunrock as the name for the official school mascot, which was re-affirmed by the UCD community in 2003. In two separate votes of the ASUCD during the 1990s, students voted to change the mascot to a cow.

Sometime in 1999-2000, one of the free rewards that you got for attending an Aggie Pack event was a plush blue horse stuffed animal. You could say that this was probably the first appearance of the mascot in some kind of physical form. 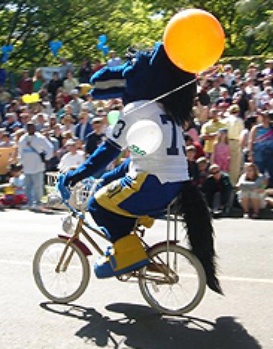 Gunrock in all his glory 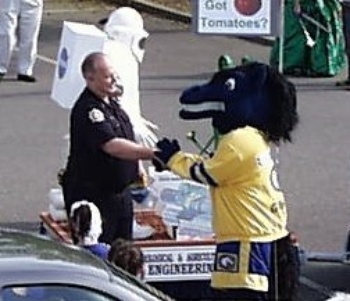 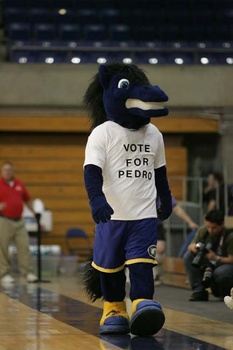 Gunrock at a basketball game.

When Gunrock trots out onto the field what sort of mascot will he be up against?

Any way we could find a list of Gunrock's real identities? I believe the current one just got his PhD, and that made me wonder who it really was. - AllisonEriksen