The H Street bike tunnel goes under the railroad tracks. The corrugated metal tunnel has two sloping entrances on H Street and a short winding path that opens onto J Street. 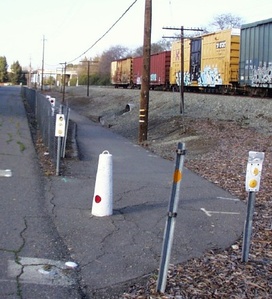 The H Street entrance which is south of the Davis Little League complex and the Covell Boulevard bike overpass. 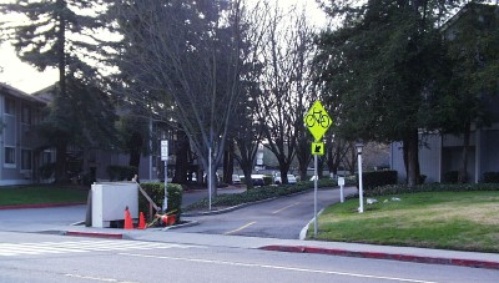 The J Street side.

Be warned that when traveling from J St to H St, the abrupt end of the tunnel at H St can lead to a bad accident if you're going too fast. Be sure to slow down as you near the H St side terminus of the tunnel to prepare for the immediate 90 degree turn. The turn is not very forgiving. Gravel can accumulate here after a rain (see History below) making it particularly slippery. There is now a wide concave mirror at the T-intersection as you exit the tunnel- use it to view oncoming bikes/pedestrians!

Conversely, be careful when you "exit" H Street and go down the path towards the tunnel. Since it is essentially a blind T-intersection, you're not going to see who is in the tunnel, or about to leave the tunnel.

Both of these warnings are especially true in the mornings between 7:30 and 9 a.m., and again from 2:00 to 3:30 p.m., as students going to and from Holmes Junior High to their homes in North Davis frequently use the underpass. 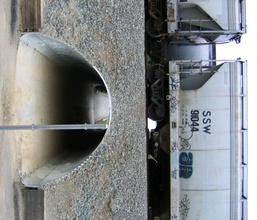 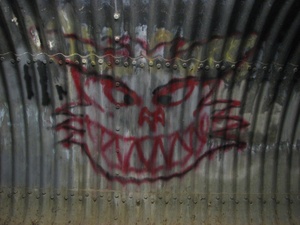 Before Davis became urban, a small stream channel (probably a branch of Putah Creek) flowed across the valley at the location of the bike tunnel, and the Southern Pacific built a bridge over the stream channel. Later, the stream channel disappeared as Davis grew, and the railroad bridge was no longer needed to span a waterway.

At this time, the railroad tracks were still very busy, with freight and passenger trains, and children needed a safe way to get across the tracks to get to schools and parks. The Covell Boulevard overpass hadn't yet been build, so when a train was stopped in town there was no way to get from East to Central Davis. Davis planners and engineers cleverly arranged to have the bridge replaced with a tunnel to allow schoolchildren access across the busy railroad tracks to get to schools and parks. They simply installed a culvert under the bridge, then, presumably, filled in the remaining area under the bridge with fill to make a continuous gravel roadbed for the railroad.

This was a win-win situation for everyone. The railroad no longer had to maintain a bridge. Walkers and bicyclists now had a safe passage across town free of interaction with cars and trains. And a small town had solved a thorny transportation problem at a very affordable cost.

(in 1970, a similar project was proposed where the Putah Creek Bicycle Undercrossing now is. Unfortunately it was not completed at the time that the railroad removed the wooden bridge, and it took 32 years and several million dollars to correct this oversight!) 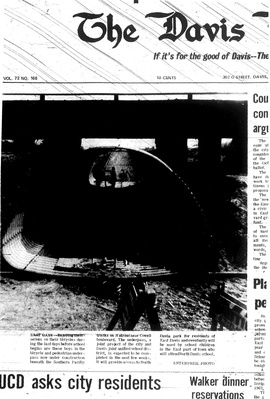 Building the bike tunnel—showing how the culvert was installed under an existing railroad bridge. from the September 2, 1969 Davis Enterprise

In my 3 years at Holmes, and a near lifetime of bike thru that tunnel I've only had super sketch instances maybe 4 times. It's a shame that the mirror that was put in place near H st entrance got vandalized hella quick. Daubert