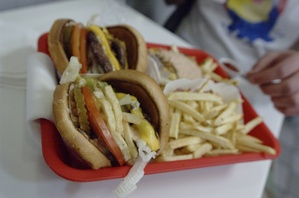 An animal style burger with fries inside from In-N-Out 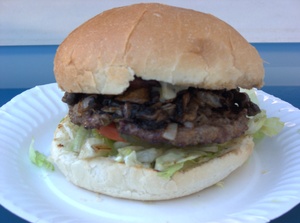 Sometimes, you just get a craving for (what is claimed to be) one of the most American of foods: the hamburger. But where to go?

Where's your favorite place to get a burger in/around Davis?

2007-08-16 18:58:17   I can't claim to have tried all of the burger places listed. But my current favorite is Crepeville — a good-sized, good quality burger, served quickly (not "fast food" fast, but faster than Redrum Burger, which is not saying much). Plus, if you get it with salad instead of the potatoes, the salad cancels out any unhealthiness of the burger. Really. —CovertProfessor

2007-08-16 18:58:28   Ali Baba, hands-down! I haven't tried all of the burgers in town, though. If you can stand the wait, and possibly of getting a terrible burger from an apathetic employee, Redrum Burger rocks, too. —PhilipNeustrom

Indeed, Ali Baba's burgers are very flavorful — I have no idea what makes one burger more flavorful than another, but the one I tried (cheeseburger with mushrooms) was. —CovertProfessor

2007-08-17 00:52:04   Ali Baba makes *great* burgers. Hands down, seconded! The feta is yummy, the mushrooms are plentiful, the bacon is thickcut. White and wheat buns, and they also make the same burgers with chicken (and I think they do have a salmon burger). —EdWins

2007-08-17 02:17:01   Most of the "gourmet" burgers around town are good, but their toppings mask the meat as if there's something to hide. Maybe there is something to hide, like a knuckle or a misplaced tooth. I don't know. What I do know is that the mushroom burger at Ali Baba blows away the competition. There's a good quality bun, it's really big, it hold together well, and the toppings bring out the meat's flavor. They'll take orders over the phone, so they're a great burger option if you're on the run. One note of caution— if you have a stick shift, the burger is far too juicy to eat while driving. —CraigBrozinsky

2007-08-31 09:36:05   I think Tommy J's Blue Buffalo burger is the best burger in Davis. Aside from that specific burger, the patties are homemade; good size and taste. He also likes to talk to each customer and get feed back which creates a very welcoming atmosphere. Redrum Burger is a crap shoot, like Phillip said above. I also enjoy Sam's Mediterranean burgers on occassion. —JamesSchwab

2008-02-03 13:22:35   I'm still looking and picked up some good tips here. Redrum is underwheling with an overwhelming bun and soggy fries. Dais Bistro is not bad. I'm originally from Anaheim, so hey, Carls Jr. is not a bad burger. Double Del at Del Taco is a decent fast food burger. Right now my vote goes to Burger Habit. Expand to West Sac and go to Hefty Burger for the real deal. —DavidFeliz

2008-08-05 08:48:07   The Graduate has the best burger I've found in the US. I've been to maybe 50 places (sports bars and restaurants, not fast food places) around the US. The burger/beer combination is the best unbeatable, with so many types of fresh draft beer (they pour enough that the beer rarely goes stale). —dwlotter

2012-11-02 01:44:15   The best burger I ever had (so far) was one at the Roseville Galleria earlier this year. I'm not joking. One of the eats at the food court is a mini-Buckhorn. Don't know if it's related to the Buckhorn in Winters, but it probably is, judging by how good my blue cheese burger was. It was cooked to medium well perfection and was just the perfect amount of greasy.

But, I've also had a burger from almost every single place listed on here. My top 3 are, in no particular order, Ali Baba, Cafe Bernardo, and The Graduate. I haven't tried Tommy J's yet, though, which I hear is really good.

Burgers and Brew, while good, is quite overhyped IMO. —CecilioPadilla