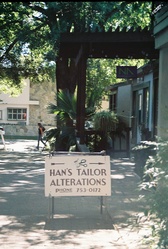 Han's Tailor was quiet little tailor shop tucked away behind The Mustard Seed. It was little hidden but if you walked around in the complex, you'll find it. This place offered alteration services at very reasonable prices. They could do an alteration in a short period of time, and they could do it well!

What was your experience with Han's?

2006-11-09 12:35:05   My first experience with him was horrible! He lost a pair of my jeans and gave it to another one of his clients and all the while was increasingly rude. He has not customer-friendly. DO NOT GO TO HAN'S TAILOR. —JayneDoeson

2006-11-28 12:38:49   I don't think Han speaks much English, but his great tailoring makes up for his reticence. I think he's much better than Mahin's Alterations on G street, and cheaper too! Hems are $8 and taking the waist in is $15. That's super cheap compared to getting an original hem done at Mahin's for $25. I would give him tips if I were not a poor college student. =D —JuneHuang

2007-7-11 21:31:04   I've been taking clothes to Han for about five years. Once I found him, I haven't used anyone else. It's a funky little shop, but don't let that put you off. His work is very good, especially for the prices. And if you bring in several items at once, you can end up paying less than if you bring them in one by one (I've discovered this over time). I highly recommend him.—RobinLaughlin

2007-11-08 18:41:13   I went in with a vintage jacket to be fitted. Hans discussed with me what could and what couldn't be done to it b/c of strange construction. I appreciated his honesty. He was quick, inexpensive ($11) and did a great job. I will return for hem work and other minor tailoring.

2007-11-27 11:00:59   I brought my D&G blazer I just bought to him and I'm not totally happy. It just doesn't look as fitted and sharp as I wanted. Not to knock on Han but perhaps he just doesn't have this type of experience. I think I may have to go to Saks or Neimans to get it done right. —atwong

2007-12-07 16:19:18   Han does a great job with hemming, but I was most impressed with his work fixing holes in a cashmere sweater. The shoulder of the sweater got caught on something and there were two tears in it. Luckily I saved the thread that came with the sweater, and Han (actually, I think it was Mrs. Han) did such a good job that I can't even tell where the holes used to be. —SugarPlum

2008-02-28 15:22:07   This was my first experience with a local tailor here in Davis and I went to Han's based on the reviews of his expertise and general personality. I brought in 3 dress shirts (2 express, 1 CK) to be fitted around the waist and the arms. In short, I was more than just happy with the results. Taking a close look at the stitching, it was apparent that Han still knows what he's doing at his old age. —synker

2008-02-28 15:57:13   I've never been to a tailor before since I always did my hemming myself, but since I no longer have the machine nor the time, I wanted to get them done by someone. I brought a pair of black loose dress pants, a pair of slacks, and a pair of jeans to test his hemming ability on different types of fabrics. He is a quite gentleman but has an underlying sense of humor. He really wants to make sure the job is done the way you want it, so not only does he make you put on the pants before getting them altered, but after he has finished his work as well. He informed us as we were leaving that he was raising his prices just slightly. His hemming would now cost $10 instead of his previous price ($8). I didn't really pay attention to the rest of the prices, but they were still pretty reasonable. I loved the work that he did on my pants that I will definately bring more to him. I also got my bf interested in going there himeself. —UnhappyStudent

2008-07-25 10:14:14   I went to Han's based on the good recommendations here on the Wiki and I wasn't overly impressed. I took a dress that needed a new zipper, just a regular 16 inch zip-up-the-back zipper from the waist to the bottom of the shoulders, that's it. He looked at it and told me I needed to buy my own zipper and then bring it back because he didn't have one. I had no idea where to get this and he told me I needed to go to Woodland or Sacramento and find a fabric store which I did thanks to the Internet but I thought it was odd that a tailor didn't have a zipper. After I got the zipper I took it back in and while it was done in two days, it cost 20 dollars on top of the 5 dollars I already paid for the zipper plus my time and gas out to Woodland to buy it myself. The seams are not hidden which isn't a big deal in terms of the aesthetics of the dress but it let me know that the work wasn't excessively difficult or in a delicate material (just plain cotton) which I thought was a bit high considering the range of prices for hemming and what I suspect is more labor-intensive alterations. I guess that's the cost of not knowing how to sew yourself but I was not impressed that he made me get my own materials; I don't have to bring my own food to a restaurant for them to cook it. —dandysgirl

2008-10-11 12:36:16   I took a pair of jeans to Han's to have hemmed. He is quick and cheap, however you had better hope that you don't have any problems. I wasn't totally happy with the job he did (one hem was sloppy), so I brought them back to have him fix it. He was incredibly rude and yelled at me never to come back. The final job that he did was good, but I will never be returning. Han is very rude. —mczinn

2009-01-01 13:40:04   I went there to get my jean hemmed and he was soo rude of the way he measured it and i told him i wanted it to be longer but he kept saying that his measurement is a good height and so, i decide that its probably no problem because he knows more than me. When i got my jean back and tried it on it was too short. Pissed me off soo much! Ruined my jean that i just bought. Never ever going back there AGAIN!! and he did a very sloppy job! —vangr0z

2009-04-11 09:45:03   He should just call himself a hemming specialist and not a tailor. Did a good job hemming pants but refused to do simple alterations on a dress and top that other tailors did not have any problem altering, because they were "too complicated". Changing rooms are not kept clean, there was a cockroach in one. —JTan

2009-05-04 14:33:03   Great prices, very neat hems. Can't comment on his tailoring—I've taken all my jeans and dress pants in to be hemmed, and I'm always very pleased with the results. Love that he matches hem thread colors to the original accurately; I usually can't tell the difference on my $200 jeans. Very friendly (I'm a regular customer), I think I've only seen him once slightly annoyed maybe because of a bad day? His shop is usually very busy, but turnaround time is fast—usually 2 days for my jeans. —ViVi

2009-06-08 14:20:51   Han's did an amazing job on a bridesmaid dress and it only took a week! It was a complicated job requiring letting out a bit here and taking in alot there, and it looks fabulous. He did a detailed fitting and it shows in the end. I am much happier with Han's work then with Mahin's. A+ —CGall

2009-09-19 08:48:40   DO I HAVE YOUR PANTS???? My husband went to pick up my pants on Thurs (Sept 17) and mistakenly got a pair of men's pants. He brought them to me in Boston (long story) and only then realized they are men's pants and not my pants. Email [email protected] and hopefully we can straighten out. I will call Han on Monday when he opens. We have worked with Han many times and always been very pleased. I believe this was a rare mistake (hopefully). —RaissaDsouza

2009-11-03 18:38:14   Does a great job for all of your tailoring needs. As for his customer service, you have to get his attention because he is always concentrating really hard on making sure he does not make a mistake. He also does not speak fluent English, and thus may be the reason why he doesn't talk that much. —IdealParadigm

2010-01-06 23:43:27   I went to Han's again a few days ago to have some pants tailored. I would have to say that he is an absolutely great tailor. It seems that he didn't understand what I was saying, but I think that's because he does not speak as much English as he can understand. I left the store thinking that he didn't quite get what I was saying, but when I came to pick up my trousers, every single pair was tailored exactly how I wanted it. —IdealParadigm

2010-02-04 22:37:10   I brought my jeans to be hemmed a couple of weeks ago and I was extremely satisfied with the job that he did. He was really friendly and asked me what shoes I usually wear them with and whatnot. Even though it's a bit expensive ($10), I will definitely come back here. Well, unless I being able to hem my own jeans very well and not be lazy to do it myself. —snsdgee

2010-07-01 15:13:59   A friend of mine had an AWFUL experience with Han's. She went to get a pair of pants altered, and he took measurements on only one of her legs, and one of her legs happens to be slightly longer than the other, and when he returned the pants, she requested an adjustment on one of the legs. He proceeded to yell at her for this and said it was her fault when he failed to take proper measurements in the first place. —ChrisDietrich

2011-04-23 11:25:59   I thought the price was kind of high, but when I got my garment back I was really impressed. I will use Han's services more in the future, and consider altering rather than just buying something new—which seems to be the trend these days. —BrentKago

even if it's just a zipper

sounded nice thou, but quick to inform me that he isn't down —StevenDaubert