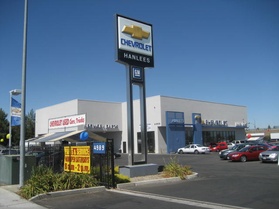 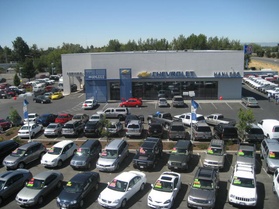 Hanlees Chevrolet is a car dealership that has an extensive inventory of new Chevys and a variety of pre-owned cars, trucks, and SUV's, as well as utility vehicles and fleet sales. It's been relocated to its own building on 4989 Chiles Road, right next to the new Hanlees Nissan building, and has a GM service center and parts store on-site.

Comments about the former and current locations also can be found on the Hanlees Chevy - Toyota - Scion page.

Hanlees Auto Group is headquartered in Davis and also has dealerships throughout Northern California.

I would like to let all of Davis know that our new hours for parts and service are, Monday - Friday 7:30am to 5:30pm and Saturday from 8:00am to 2:00pm. We have parts for all GM vehicles, not just Chevys... so if you need something for your Buick, Cadillac, Chevrolet, GMC, Hummer, Pontiac, please come in or just give us a call.

Plese come in and mention this post and receive 10% off all your parts purchases. Ask for Adam or Louie. Or you can just give us a call at, (530-231-3300). We want you to have a good experience, feel free to call us or email me at [email protected] with any questions or concerns. —giantsfan

2008-08-09 12:38:52   I took my Dodge Durango into the Hanlees Chev store because it had a General Motors extended wty on it....they gave me no trouble at all working on my Dodge, I asked them if they honored other Aftermarket extended warrantys and they told me yes....I had a very wonderful experience at the Chevy store....they were very knowlegable and always kept me informed....they now have all of my business. Pam Barringer —PBarringer

2008-10-03 20:11:55   They are great if you are under a warranty... but I was severely over-charged when taking my vehicle in for service after the warranty. I was charged $52.25 for a free engine code readout, and I noted before the service that the gas cap was the proximate cause of the light anyways. Total rip-off. —ChristopherPrice

Thats 2 cars of mine that have been repair correctly at Hanlees...

2009-03-05 08:15:19   I am never going back to the service department again. The guy was rude, asked me what I need help with in the "what the hell do you want" tone, without even looking up from his computer screen. I walked out when he wanted to charge me $109 for an oil change and tire rotation on my car. —ahsu

2009-04-07 12:36:54   The service department is horrible. My Chevy truck had a manufacturer's defect, covered under warranty. Hanlees told me that I was partially covered, would have to pay for labor, and the parts were ordered and that they'd call when the parts came in (~4 days). When I hadn't heard back in nearly a week and a half, I called several times with no one answering or returning my phone calls after leaving messages. Same was true through email. Finally I talked to someone there who told me the parts had not been ordered and wouldn't be ordered b/c the defect was not covered. I brought my truck to Mike Daugherty Chevrolet in Sacramento and within a few days, not only was the truck repaired, but I was not charged a dime... —RMC

Often times comments like one above (horrible) are opinions given when someone doesn't get their way. For every one that says horrible there are 100 satisfied customers. I know this because I am the fixed operations director for all 6 of the Hanlees Dealerships. I would invite RMC to e-mail me with some facts surrounding their situation and I would venture to guess that some pertinent information is missing from the above statement. If RMC would e-mail their contact information including phone number I would be happy to investigate the actions of my employees and resolve the issue. Otherwise, there is not much I can do with an anonymous posting. Thank You... [email protected]

Gerry, why not let people discuss stuff in a public forum? First, you claim that pertinent information is probably missing... how could someone not "get their way" on a manufacturer recall? One that another dealership fixes without incident? Plus it's odd that you would chose to resolve the one service situation (out of three complaints) where the customer already had reported that the issue was resolved... when they took their problem to another dealership. I would suggest that Hanlees improve service (since that is where most of the complaints appear to come from), and work with each customer as if they aren't intentionally omitting information.

But based on your conduct on Davis Wiki, I would advise anyone going to Hanlees service to bring a tape recorder with them. Then there won't be any potential for accusations of omitted information. —ChristopherPrice

Christopher, I have no problem discussing "stuff" in a public forum. Knowing the information that is missing would be important for me to determine where this situation went wrong. Last 8 digits of the vin#, year and miles, name of our employee who seemingly dropped the ball etc. From there I can gather the rest of the facts and would be happy to respond here "in a public forum". I re-read the original posting again and I don't see any mention of a manufacturer "recall". I live and work in a world where facts and details are important. I am trying to improve our service offering and that is precisely why I'm here. I don't need to, nor am I accusing anyone of anything. The information I need to respond to this person is clearly not there in the posting. As for my "conduct on Davis Wiki" please let me know if I failed to be polite and proper/courteous. I thought I had at least accomplished that. Thank you for prompting me to clarify further.

2010-02-27 11:19:49   Eric the service manager and Adam the parts manager went out of there way for me. I was told by a Sacramento dealer they couldn't get the part for me. They sent a driver to get it from another dealer becuase the part is on back order from GM. Thank you for giving the extra customer service guys! It didn't go unnoticed:-) David Reed, El Macero, CA. —davidreed

2010-03-24 16:20:10   I just went in to redeem my prize because the numbers matched on the advertisement they sent me (granted, all numbers probably match). Anyways- the number for the grand prize of a $10,000 debit card is: 100756. The number for the $1,000 cash prize is: 101799. And the number for the $100 cash prize is: 110320. But if your number doesn't match any of these they still give you two gold dollars. They swarm you in the parking lot and instead of just walking in to look at the numbers you have to sit down with a sales person and listen to the car-buying deal they have going on. But hey, two bucks is two bucks... —jennymiller

2010-06-24 20:15:05   I visited Hanlees service today, the man was polite, not friendly, but my jaw dropped when he told me it would be $100 for a synthetic oil change! And 10 bucks a quart for mobil 1 is an outright LIE. That is insane and price gouging. I went here for convenience, not to be bent over. I said no thanks and left. I'm all for supporting the local community but its not good either that the employee didn't try in any way shape or form to earn my business once I was already there. It's sad to say that hanlees chevy has lost my business indefinitely, especially seeing how the gentleman in the above post spoke down to the customer who is voicing an opinion. In a very public form that is most unwise for your business' bottom line. —CARedStar

2010-10-20 22:32:07   Melinda from Hanlee's reached out and made an effort to fix my issue. I appreciate her professionalism. First time a dealership earned my business! —CARedStar

I know that's not a big thing, but it kind of rubbed me the wrong way.... —daviself