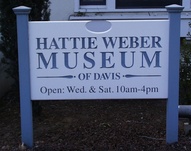 The Hattie Weber Museum is filled with exhibits that highlight the history and development of Davis and surrounding regions. The museum itself is named after Harriet Elisha (Hattie) Weber (10 October 1872-14 December 1961), who was the first (paid) librarian in Davis, John W. Brinley's favorite aunt, and the daughter of George Weber, owner and saloonkeeper of Davis' first bar. Hattie Weber served from 1910 until she retired in 1953.

The building was constructed in 1911, and was originally located at 117 F Street, serving as a library. A social club known as the Bachelor Girls was responsible for raising the funds needed to purchase the original F street lot. The library remained open until 1969, when the current library on 14th Street was completed. The former library was then sold to the City of Davis, which used it for various purposes, including a short stint as a teen center. In 1988, when developers purchased the lot and constructed the current theater/garage, the original library was saved, restored, and relocated to the northwest corner of C and Fifth in Central Park, and re-opened as a city museum on March 28, 1992, the day after the city's 75th birthday.

The museum is currently raising funds to save the WPA Building from demolition and convert it into a museum annex.

See our Museums and Exhibits page to learn about other educational opportunities in Davis.