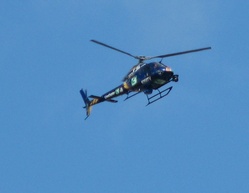 KCRA news filming the Davis leg of the AMGEN tour. Helicopters can frequently be seen hovering over Davis, especially at Night Time.

A search in the DPD website for the word "helicopter" yields no results.

Who's helicopters are these? Are they simply consuming fuel to justify the existence of helicopters in their (whoever they are) budgets? Or is this a plot even more sinister? -RishiTrivedi Davis can request assistants from Sac (city and county) who have a fleet, it's part of interagency cooperation Daubert

I've seen them practicing approaches and landings (at night) at the UC Davis airport. I suspect that someone may be doing some flight training recently, and has been using the Davis area as part of their training. I'm not sure, but I think there is a helicopter training school at one of the Sacramento airports. I know for sure there is one in Concord. —EricKlein

What was with the circling helicopter for over an hour last night (7-21-10) from 10-11pm? It seemed to be over the old cannery area. —NoelBruening

I saw him as well, it looked as if they were checking H street and the train tracks, after circling for a while it peeled of and headed back to sac Daubert Helicopter over head tonight broadcasting with loudspeaker ~SD Also last week a squad of attack helicopters & some hueys were seen heading towards Travis