Herons and egrets are birds that have long graceful necks, beautiful long legs and bird song that sounds like a pig being stabbed.

At least one green heron (species Butorides virescens) lives near Aggie Village in the UC Davis Arboretum. It flies very gracefully, but it walks swaying from side to side with its shoulders hunched up, sort of troll-like. This species of bird can often be found hunched over the water remaining completely still only to dart out when it finds its prey of choice. It can be easy to miss, unless you flush it and it flies off making loud and obnoxious squawking noises. Great Blue Herons, American Bitterns, Great Egrets, and Snowy Egrets can all be found gracing the land of the Vic Fazio Yolo Wildlife Area (Yolo Bypass Wildlife Area). 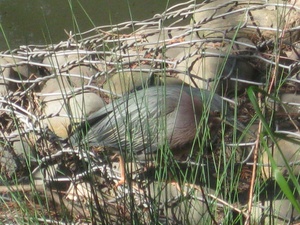 Green heron spotted in the UC Davis arboretum in March 2011. 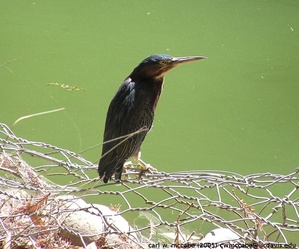 A green heron perched on a rare species of wire-plant in the UC Davis Arboretum. 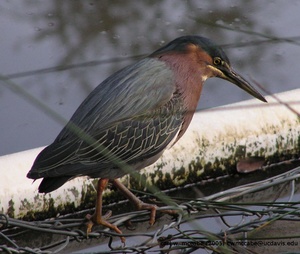 A green heron forages for prey among the wire and the pvc. 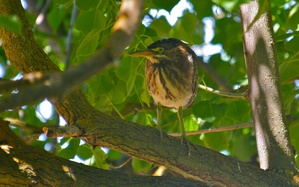 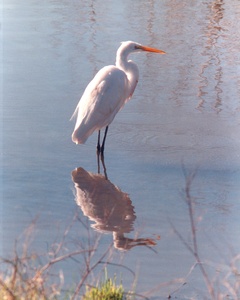 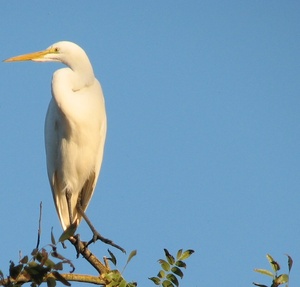 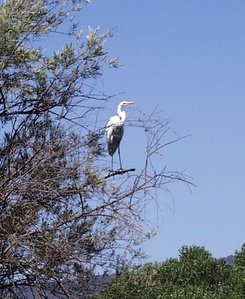 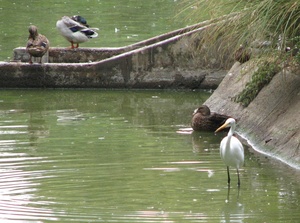 2005-06-09 20:50:07   Anyone who likes egrets or herons should not miss the rookeries in the Arboretum. Night herons nest in the trees directly across from Putah Creek Lodge, but the spectacular rookery is just south of the Vet Hospital. Hundreds of snowy egrets and night herons nest in the arboretum trees in the spring. —JudiKay