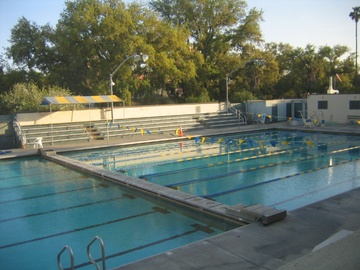 Hickey Pool in the afternoon

Hickey Pool is a pool on the UC Davis campus. It is where various club teams practice and many water-related UC Davis classes are taught.

The pool opened in September of 1938 and the University supplied swimsuits. It now offers 7 heated lap lanes for swimmers of various speed levels. There is also an area split from the rest of the pool by a floating walkway that is shallower and usually more comfortable for folks not looking to be the next Michael Phelps.

Sometimes when the pool is closed, people who are able to do pull-ups climb over the southwest corner of the wall surrounding the pool.

Hickey pool used to be the home of the UC Davis swimming and diving team until the Schaal Aquatics Center opened in January 2004.

In 1962 when I was growing up in Davis, this was one of two "public" pools. (The other one was the pool behind the current Davis City Hall.) Lacking a shallow end, I had to learn how to swim very quickly. Little kids would line the edges of the pool and hang on to the gutter until they learned. To be allowed into the deep end and to use the diving boards, you had to first demonstrate to a life guard that you could swim the width of the pool confidently - a mile swim for a 4 year old. - SharlaDaly

Does anyone know how long this pool is? It doesn't seem to be the standard length. - hankim

2008-07-02 22:25:15   I swim here weekly and it is usually crowded. Lanes are always full, as is the split area. The guards are nice, but I'm getting less and less enthusiastic about swimming here. Some people (a particular group of girls that frequent) think the split area is a Rec Pool equivalent (IT'S NOT) and think they can float around on noodles and socialize with their friends for an hour while blocking half the pool. This is really irritating to people who are trying to swim laps there. I think the guards should try to do something about this? —SRB

2009-07-07 13:28:44   I like simmimg here, at the Hickey, however, this is the first time in my life I see a pool that is most of the time closed. The hours of operation are only 4.5 per day!!. I really do not understand why. And it seems that the reasons are a mistery. If they have courses or something they should have a swimmimng pool for the students who love swimmimg (not like the REC)and who are not members of any club. Also, I have noticed there is the schaal aquatics center but if you go to the page of the university there is not any information provided about it. "Described as "the new home for UC Davis' intercollegiate swimmimg, diving and waterpolo teams" it seems to me there is a lot of pools here in the university, but ironically, there is no one for the students, except the Hickey. It is really sad, that if you like swimmimg you have to pay a pretty amount of money per month in a private place or club, when there sould be a swimmimg pool at the University (like in many others in the country) for the students with a regular and normal schedule. —moni