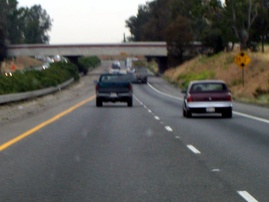 California State Route 99, or as it’s commonly known, Highway 99, runs from Calexico, California along the Mexican-US Border to Blaine, Washington on the Canadian-US Border. Originally built in the 1920s, Highway 99 served as the main thoroughfare for traffic going up and down the West Coast States. After the completion of Interstate 5 in the 1960s, Highway 99’s prominence began to fall to a second. Consisting of two lanes going either direction, Highway 99 unlike Interstate 5 rarely increases its number of lanes to allow for increased traffic around civilian centers. While both run parallel up the state and at times merge into one Super-Highway, 99 takes a longer time to reach Sacramento due to traffic around the smaller towns in the Central Valley. Highway 99 is the route most people would take to get to UC Merced and Chico State.
Add tags
Cancel
Nearby LocalWiki regions: Woodland, CA Fortress Bay Area Dixon Woodland West Sacramento Winters