With the rise of groups such as Anticon, and labels like Definitive Jux, to underground fame, came a flood of raw and talented hip-hop groups to the Davis scene. A group called 'Rhyme Scheme' begin the official new era of Davis hip-hop back in 1999, years after the graduation of the men who put Davis on the hip-hop map: DJ Shadow, Blackalicious, and the entire Quannum crew.

But what the hell happened? Even in late 2003 there was a hip-hop alternative to the 'scene' revolution nearly every week. Now there is nothing but the scattered and poorly attended performance.

2003 was the new golden age of Davis hip-hop. This is the year of the highest concentration of talented, local acts. The problem is, Total Package, Plan B, The Jaded Emcees, iDeaLiSTiK, INE, Nostalgic Progression, and Eufonik all went away.

Maybe it was because of the lack of support. Certainly it is discouraging to see an only half filled show each and every performance. The problem with Davis hip-hop fans is that they are fickle. They do not support the general scene but only their buddy in one of the groups. Reminiscent of Tryte fans, they leave when someone they don't know comes on stage.

At least some groups moved on. They did not die with the scene. Others stayed, but are hiding in the shadows, waiting for better times and more eager ears.

Davis is, for the most part, a cyclic place. People come and they go, and while some make an impact, the impact can only last as long as others are willing to carry it. There are certainly folks at KDVS who will not soon forget the great Hip-hop scene that Davis had.

2010 - UC Davis student Soup Da Jour is on track to single-handedly revive the Davis hip-hop scene. A born lyricist and hook writer, his breakthrough debut hit single "Voodoo (feat. Noah + The Man)" brings a fresh direction and is rapidly gaining popularity in clubs nationwide. His soon to be released second single is an homage to Davis - the city he calls home.

2004-12-07 17:19:04   The davis hip hop scene has had its ups and downs. I think the real problem is the complete lack of coordination on the parts of the venues... Dunno if I have any bright ideas on getting the nightlife around here a little more organized, but I'd be down to help. - KenNeville

2004-12-18 23:11:12   I used to complain frequently that there was no venue for local music, but there are places to play if you are willing to work to make your own shows, and there are ways to get connected. There's no real commercial venues to hop onto big shows with touring bands, but there's a good chance those venues don't want you anway. (unless you are brilliant red lights) - JoeConte 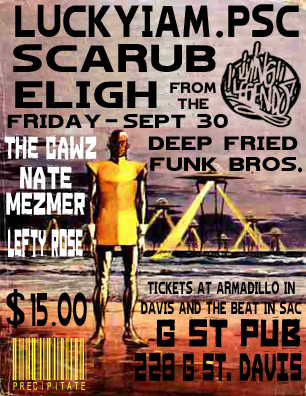 Maybe this will help it out of the woodwork