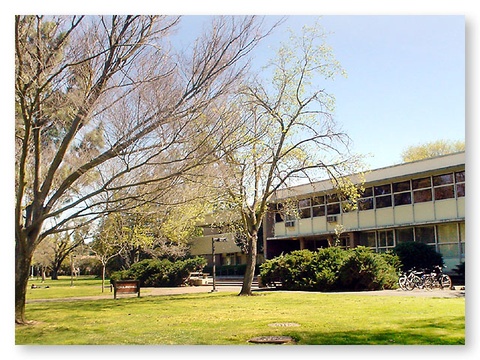 Hoagland Hall is named after Dennis Robert Hoagland, a professor of Agricultural Chemistry & Soil Science, and is home to the Atmospheric Science program as well as the Environmental Health & Safety office. The building was formerly occupied almost entirely by the Soil Science department along with the rest of the Department of Land, Air, and Water Resources, as can be seen by the display of soil samples still extant on the south side of the building. With completed construction of the Plant and Environmental Sciences Building, LAWR released much of the building to campus and Hoagland Hall is being renovated [Sep 2006] to better accommodate other uses.

Hoagland was built in 1958 and originally served as the soils and plant nutrition building.

Hoagland Hall is on the west end of campus, just south of the Co-Ops and north of Hutchison Hall. It is a relatively small building, only two stories with an even mix of classes, labs, and offices. Immediately to the west of Hoagland Hall lies the Hoagland Annex, a former garage converted to offices for graduate students. The wooded area to the south of Student Housing is affectionately referred to as "Lake Hoagland" during the rainy season, as it frequently floods.

There is not much of interest within Hoagland Hall, except for the fact that the ROTC Armory is kept in the basement. Coincidentally, the Students for an Orwellian Society used to hold their secret meetings at Hoagland Hall.