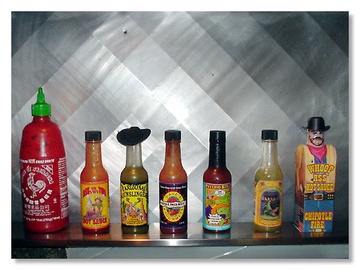 Hot Sauce is what puts the zing in your day! Because winter in Davis tends to be wet and dreary, you'll need this magic stuff to keep that fire burning in your belly. Being a town of semi-cultured foodies, most supermarkets & grocery stores stock a decent selection of these spicy condiments, and what can't be found there can either be found in your favorite international food store, Ikeda's, or Pedrick Produce. If you've got a hot pick, add it to our list along with a description of the flavor and heat. Those who prefer their hot sauce on top should check out our Food page for places to find accompaniments.

For a sauce that originated in Davis (but has since gone national and moved out of town), try Wing-Time. Afghan Pepper Company is trying to become the new Davis-originated hot sauce. 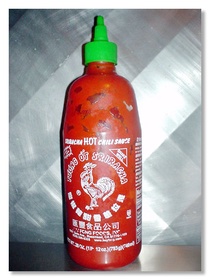 The staple Sriracha goes with pho like Tapatio and college boys

Dave's Total Insanity... not the tastiest, but probably the hottest!

Cost Plus World Market has an interesting array of hot sauces. At least two of them are made from the ghost chili, once heralded as the hottest pepper in the world.

Enter Pedrick Produce, head to the back wall, turn right and walk straight. You will then encounter a wall full of every hot sauce known to humanity. Everything from "Scorched Buttplug" to "Hillary's Hotlips" (many political sauces) to "Puckered Asshole" to all the varieties of Tabasco and popular rubs like Tony Catchetore's hot spices. It is truly an epic experience for the hot sauce aficionado. But if you're really serious about your hot sauce, head back to the checkout counter and look up. On an overhead shelf behind the counter are perhaps the most potent hot sauces you'll ever taste. With names like "Satan's Blood", it's no wonder you have to sign a release form to buy them.

Hot Sauces Consumed In, but Not Necessarily Available In Davis

If these are available in town, say where.

Ass in the Tub adds a great heat/flavor to homemade mango salsa!

2005-07-06 16:03:23   The Reserve of which you mention is Blair's Death. The biggest reason for me to drop the $15+ for entrance fees at The Book And The Cook Fair in Philly was visiting the Blair's Death booth and buying a case of Blair's Death Cheese Sauce. Your sauce can be found here. I'm a weenie, I know, but I forgot how to do the linky thing. —BlancheNonken

2007-04-09 10:32:43   We put Death Sauce in our friends Burrito once while he was taking a dump. He seemed perturbed, then he went back to the bathroom. Never heard from the guy again? —JarrettNoble

2012-01-30 01:12:33   Co-op has Boulder Hot Sauce Company. Difficult to find outside of Boulder and in my opinion the best balance between heat and flavor ever invented. I prefer their Smokey Serano over Harry's Habenero but they're both outstanding. —MikeyCrews