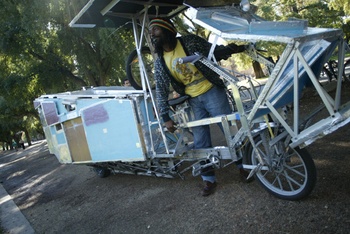 The Human Powered Housing Project is a bike/RV contraption built and lived in by Brian Campbell. It's about fifteen feet long and is absolutely one of a kind. Brian rides around in style under a shade canopy while protected by a motorcycle like windshield. His house forms the back of the rig. It has windows, a slot for donations, a comfortable looking bed, shelves and everything else a person would want. When parked, the project sits on an incredibly sturdy kick stand because this is probably the heaviest bike that you've ever seen. It's made mostly out of materials that you can find at a hardware store. It looks like there are a lot of aluminum struts and foil tape. The back wheel is much larger than your average bike wheel but the front, while still homemade, looks more normal. The gear system is pretty beefy as well. This is at least the second Human Powered Housing Project to exist. Look below for a picture of an earlier prototype. Anyone know what this thing weighs?

Allegedly, he rents out his "room" for $10/night. That's probably less than what you're paying for rent. Rooms? How many does it have? Has anyone ever done so?

Brian is now living in the Portland Oregon area. He hasn't lived in Davis for a few years. My source, who was formerly a "homeless" street musician, now a bike builder, said that about five years ago he verified Brian's riding when they both rode up Siskiyou Mountain Pass.

Sleeping bike trailers have been around for many years. There are others who live on their bike, in a different way.

On a related subject, Davis is world famous for its human-powered vehicles. There are many bikes that are unique to Davis.

The Winnebiko of "high-tech nomad" Steve Roberts was an earlier version of an all-in-one bicycle-centered environment.

As seen in the Aggie.

Brian claims to be able to sustain 70-80 mph on the vehicle. He has told me how he does it, but I have not seen him go anywhere near that. Anyone know for a fact whether it is possible, and if so, whether he actually does it? -ChristopherMcKenzie

70-80 mph? Perhaps this may be the vehicle's terminal velocity after being ridden off the edge of a cliff ;-) More seriously, the top speed in a downhill-coast situation depends crucially on the vehicle's drag coefficient (air friction). And the more drag there is, the more weight becomes a factor (heavier=faster). The Human Powered Housing Project is neither sleek nor heavy — I would not bet on it in a Soap Box Derby, but I would wager that in a wind-tunnel situation at 80mph, all that the foil tape you see would lose its grip on those foam panels! - E

That is when his front cow-catcher gets caught on the rear bumper of an 18-wheeler going down I-5.

I've seen a child's car which goes that fast. The speedometer was painted on though...

Doesn't the rear cabin of this bike look a lot shorter now than when this bike originally appeared in Davis? I think it may have been recently truncated? Was there some sort of damage to the rear which was removed? It doesn't seem like a good night's sleep can be had in it now.—RickEle