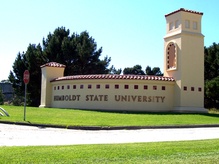 The main entrance to Humboldt State. 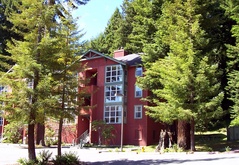 One of several dormitory regions at HSU. 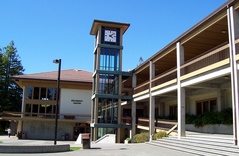 The student union, campus belltower and the bookstore.

Humboldt State University is located within the small northwest coastal town of Arcata. Located some 10 miles north of Eureka on the northern part of Humboldt Bay, Arcata is a college town like Davis but without its essence. Noted as the northernmost campus in the California State University system and one of the smallest; with a student population numbering just over 7,000, the students make up half the population of Arcata. The campus is tucked away in the hills overlooking the Humboldt Bay in a patch of Redwood forest that comes down from the coastal mountain range, similar to UC Santa Cruz in this respect. Humboldt is one of the few campuses to offer botany as a major and is a magnet for students who are majoring in environmental and ecological sciences. Like many public colleges across California, Humboldt is expanding; adding two new buildings this coming year. To get up to Humboldt State from Davis, go up 505, 113, or I-5 up to Redding. Then take 299 across the beautiful Trinity Alps before arrive just north of Arcata. Many Davis students could be found in the redwoods or in campsites in the area, particularly in the summertime.

The University is divided into three colleges:

On October 8th, 2011, DII Humboldt State defeated UC Davis in football at Aggie Stadium, 23-17. It was an ugly game and a shocker for the Aggie faithful.

*Dan of Dan's Cab is a Humboldt State Alumni any other alums add yourself : )