This site is for those in Davis who enjoy the wonderful past time of hurling objects for the heck of it. Those interested in hurling things at people in armor running at them might get involved in the Society for Creative Anachronism's siege warfare.

Places where heavy things can fly 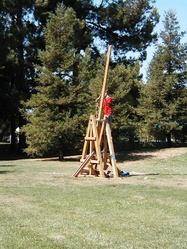 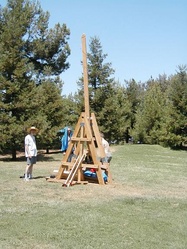 2007-05-10 06:41:52   In Mrs. Cook's sixth grade class at Robert E. Willett School we made catapults and launched marshmallows half the class against the other half. My catapult was very small, using less than two feet of 2x4, some other scrap wood, a nylon strap and rubber bands, but it was just as good or better than some of the bigger ones. —NickSchmalenberger

2008-05-06 14:38:25   Guys the new park supervisors have banned Devin from using his trebuchet. Please help him by sending letters to the Slide Hill Park supervisors. Info on how this occured on my facebook group. Thank you for listening Please join here to support Devin: [WWW]http://www.facebook.com/group.php?gid=13858129614 —mrattlesnake

srsly, what if we don't get down with FB? Daubert

2009-04-30 14:24:04   This thing really needs to get out and stretch it's legs before the lumber atrophies. I'm currently trying to set something up, hopefully for the 2nd or the 16th, but we'll see how that pans out. Hopefully we'll be able to get a few rounds off before maintenance crews show up for an unscheduled silent protest. —MasonMurray

When's the next demo? —JamesM