IKEA is a popular retailer of flat-pack furniture and various other Scandinavian-ish housewares. Their furniture is trendy and both affordable and well ... cheap. The West Sacramento location is by far the closest. A 20 minute drive, it's right on the other side of the causeway. This location opened on March 1st, 2006. They are actually owned by a non-profit charity (although there is some question about their level of actual charity), and are the third largest consumer of wood in the world. 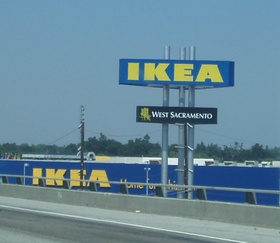 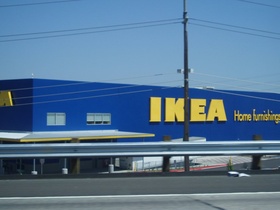 Furniture is IKEA's most-recognizable item. Everything is "flat packed," meaning that it is compact enough to be easily-transported in most vehicles—but you have to assemble it. If you plan on buying several items, it might be a good idea to go down to the tool section and buy an IKEA tool kit which contains a few tools and bits for electric screwdrivers, as well as a hex-screwdriver set.

While the catalog showcases the furniture, IKEA sells everything from office supplies to barware, candles to fluorescent light bulbs. Everything has a designer touch: it is distinctive, so you'll either love or hate the item depending on your tastes. For example, bright neon pitchers sit next to classy, etched stainless-steel martini shakers and ice buckets. Many items are designed to match each other or the furniture.

Good buys include their batteries and fluorescent light bulbs.

IKEA is more than just a furniture store. It is the 11th biggest restaurant in Germany, and also sells a variety of Swedish food in a small, grocery-/cafeteria-style environment. From classic meatballs to the traditional dishes of Swedish holidays—who knew crayfish was a traditional food in Sweden?—the food is inexpensive and very well-prepared.

The West Sac IKEA is also a great place for a dinner party.

If you have kids, there is a nice children's area; in the Emeryville store, it is close to the restaurant so parents can sit and have something to eat/drink while keeping an eye on their kids.

2006-01-09 10:19:19   I can't understand why people gush over IKEA so much. Most of the furnature is cheaply made in China with a silly Swedish name attached. But somehow that makes it stylish... —GrumpyoldGeek

2006-02-03 03:34:33   Gee, I just can't quite put my finger on why cash-strapped college students would want to buy ultracheap furniture in one location. Hmmm... Actually, truth be told, I've never set foot into an Ikea, but I have assembled two pieces of their furniture on two different occasions. I must say, the furniture is quite durable, and as I understand it, came at a fairly good price to the person who bought it. I also have an Ikea lamp which was given to me as a gift, which according to the sticker cost something like $10, IIRC. I've used it daily for 4 years, and I've never had to replace the mini-bulb. Excellent. Also, I just remembered that I was given some Ikea silverware, dishware, and glassware, all of which has been as good as my other, non-Ikea kitchenware. —JohnNapier

2006-10-02 20:35:16   I bought a computer keyboard tray for my desk, but when I came home I realized it was incompatible and the colors did not match with anything in my room. Since it was already open and the return policy (12 days or something) already passed, I now have a disassembled keyboard tray that's taking up room in my closet. Incidents like these happen alot I hear. —AtyNguyen

2008-09-06 08:03:42   Ikea is GREAT for decent furniture and CHEAP prices. My family has purchased MANY MANY things from here... kitchen gadgets, pictures, plants, bedroom furnture. PERFECT FOR COLLEGE STUDENTS OR THE CASH STRAPPED HOMEOWNERS. I wouldn't buy their mattresses though. Ever been camping?... that's how IKEA mattress feel. I got four mattresses for my family at Mathews Mattress. They have a huge selection and the best prices around. They have bedroom furniture too, but it's mostly the good quality stuff, not much cheaper stuff that students want. —j.davis

2008-09-06 09:07:15   I got a number of items at Ikea. They have held up well, and were easy to transport home. They could also be disassembled in a few minutes, which was important when moving between apartments. The quality of some of the items is not necessarily the best, so be careful what you buy. Some items are grammatically strange because of their names. For example, you can buy a not lamp, but you can not not buy a not lamp (since you can buy a not lamp). Their selection of desk, table, and shelving items is quite good. I would agree with the previous poster that their bedding is not the best choice unless you like something very firm. Their chairs are also not a great choice - I tried every one that they had and could not find one that was comfortable to sit in, even for just a few minutes. Of the lamps that I got there, one was just fine ($7), one makes a loud buzzing sound (same model as the $7 one), and two emit very bright light behind the cone shaped shield (these two are desk lamps), making them unusable for direct lighting on a desk (the light becomes blinding even though the lamps are pointed away from me.)

Since Ikea is kind of far from Davis, you may want to consider saving additional money, fuel, and damage to the environment by making your Ikea shopping run with a group of people in the same vehicle (so long as your vehicle is large enough for the components of what you want to buy). They do deliver, but at great expense.

Measure the dimensions of the relevant parts of your car before purchasing. Some of my purchases there have been determined primarily by what would fit into my car without removing portions of it. :-)

Some of the things that they sell come as components that you can mix and match to suit your needs.

The food they have at Ikea is not bad. —IDoNotExist

2008-09-06 09:33:28   In my teen years, I recall several day trips down to Emeryville just to wander through Ikea. I used to think their furniture was a panacea for all home decorating quandries, but have since toned it down a bit. I still like Ikea, especially since it's so close, but I'm not as fanatical as I used to be after a few things I bought didn't hold up to my expectations (granted, only a small percentage of all the items i've purchased over the years).

Also, you can get a lot of Ikea stuff on craigslist for even less, and already assembled.

They also started a new program where if you pay with a debit card, you get a coupon for something like 3% of your total purchase printed on your receipt, to be used on your next visit. They say they're doing this because they want to cut down on credit card fees they have to pay the credit card companies.

Also, (direcected at IDoNotExist) the light bulbs can be kind of bright because they're compact fluorescent rather than standard bulbs. Try just replacing them with bulbs of lower wattage. —MaryLieth

2008-09-06 14:18:39   The super bright bulbs that I was describing were not compact florescent, but rather halogen. I bought two halogen desk lamps there. The back portion of the cones containing the actual halogen bulb, reflector, and UV shield, have many slits in them (probably to provide a way for the heat to escape). Unfortunately, the light from the bulb is reflected or transmitted through these slits. I didn't notice it until it was too late to return them. —IDoNotExist

2009-01-20 23:35:41   sure, IKEA stuff is cheap and flimsy, but as soon as you realize that not everything you own needs to meet or exceed specs for the international space station, you kind of get to like ikea. Its like shopping at a thrift store, that only sells new stuff. —BlueDot

2010-03-22 16:31:23   Love the restaurant food!! Fries are surprisingly good. Chocolate mousse cake is excellent, not too sweet at all. Though the meatballs have gotten smaller.. —LeeY