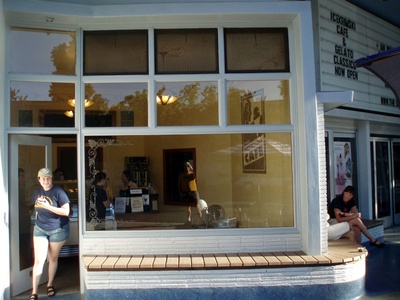 ArielaHaro waltzes out of the storefront with a vanilla gelato.

A Gelato and Candy shop, now serving bulk and gourmet candies and hot chocolate. On their opening day their computer system was down — resulting in free gelato for all! It has a window into the Varsity Theatre as well as a regular storefront. The cafe is owned by Sinisa Novakovic, who also owns Mishka's Cafe and co-owns the Varsity with JonFenske

This cafe serves Caffe Classico Gelato (dairy) and Sorbetto (non-dairy). Both are also available at some local grocery stores. 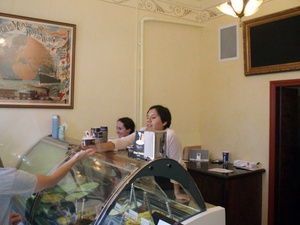 You get a triangular GLACE wafer with your gelato.

The walls are painted concrete, and as a result, voices echo loudly and the acoustics are poor inside the small store space. I haven't noticed this, and the walls have some sort of plaster sprayed on them for the texture —StevenDaubert Now that we sell candy we've got shelves and candy jars all over the walls that help with the acoustics of the shop. —MeganYourFace

2006-07-24 23:55:19   Excellent gelato! Finally someone opened a gelato shop in Davis. And in time for the heat wave too. The only nagging question is: what new flavors are they planning for the second cooler? P.S. hazlenut chocolate... mmm... —LiRic

2006-07-27 17:14:37   Computer system down = free gelato?? What, so before computers were invented there were no monetary transactions anywhere? Are people that bad at math? —BarnabasTruman

A few plants strategically placed in the corners would help with the excessive echoing, along with acoustic tile on the ceiling to break up the standing waves. -KarlMogel

2006-08-23 13:20:10   As an ice cream guru here is the skinny... the gelato is YUMMY! wonderful! I love it! It is the same brand they sell at Zia's but Zia's isn't open at night. They also sell pints of it at the Co-op. the ice cream is double rainbow brand and is tasty. Also pints at the Co-op. The shop is really well placed and done. I really like the community it adds to downtown. Another great reason to walk around and mingle the people on the planet you live with. Thanks for opening a great new hang out for ice cream in downtown!! —HeatherMartin

2007-02-28 23:53:35   A foodie told me that dots you see in the vanilla bean and the double espresso bean shows that it comes from real beans, not extracts. —StevenDaubert

2007-3-14 I just stopped by here for the first time tonight, and it made my evening. I didn't have cash when I walked in (they only take cash), but after a few samples I rode my bike to the bank to get money. Yeah, that's how good it was. The fruit flavors tasted EXACTLY like the fruit they're named after (tangerine, mango, lemon, coconut). Reminds me of France. And the chocolate flavors (chocolate mint, chocolate hazlenut, chocolate malt) were so rich and perfect. Reminds me of Italy. I love trying new and slightly strange things, so I LOVED the ginger flavor (try it!) and the blackberry cabernet sorbetto. Wow. Red wine flavored sorbet. Why didn't they think of that sooner? It tasted like a luscious grown-up popsicle. So I guess what I'm trying to say is that you really should try this place. Just remember to bring cash! —MareGiudice

2007-03-22 16:16:15   I love gelato so I decided to try this place. It looks nice and the variety of flavors were okay not that great. Pricing was a little steep for me compared to the gelato stores I went to in the Bay Area. It was decent gelato but not the best. Customer service was terrible, the server kept avoiding me and my friend (guess he didnt like Asians). Basically wanted us out quickly and didnt even offer samples to us. From this I wouldnt come back here as often. —BrandonToo

Any evidence for that charge of racism? —JimEvans

I assume the idea is that he and his friend are both Asian. Not much evidence, I agree, but there you are. —NickSchmalenberger

Just seemed that the server didn't want to serve my friend and I. The group before us were treated very nicely but when it came to us he acted like we didnt belong there. We didnt even do anything but smile and greet him. Then a group of guys come around and immediately the server greeted them in a friendly manner and asked them if they wanted any samples. He actually avoided us until I asked him what I wanted. Simply stated I had a bad experience here. And a sidenote is that both groups before and after us were white people so of course it would feel strange as to why we were not treated the same way. — BrandonToo

2007-03-24 23:21:49   Stumbled upon Icekrimski the other night, had a very pleasant experience. The two brunettes working were swamped but still able to greet each customer and serve them with efficiency and smiles. The Gelato was fantastic, I'm definatley going to be a regular! —JacobWright

2007-04-29 18:50:33   Icekrimski's has really yummy gelato! I went to a huge gelato place several months ago in my hometown of Los Angeles. This place was in the Santa Monica Promenade, and had like a hundred flavors! Still, no matter how many flavors this place had, their gelato was not awesome, and totally paled in comparison to Icekrimski. —ArielaHaro

2007-05-06 14:49:06   With a ton of unique and wonderful options to chose from and the opportunity to sample the most tempting morsels, this is a must try spot in Davis. The staff is funny and very attentive. Stopping here leaves a pleasant smile on customers faces with a hint of nutmeg! —RachelRagatz

2007-05-19 18:57:58   When getting gelato tonight there were two people working but only one was actually helping customers. The guy just sat there talking to friends, I assume, while the girl had to help everyone. I kept expecting him to stand up and help us, but we ended having to wait a while for the girl to help everyone before us. I don't know if he was on a break or something, but i just thought it was really rude that he wasn't helping her. When we finally got our gelato, it was delicious, just wish the service was more professional. —JoyChu

2007-05-22 07:12:49   My friend and I went there yesterday. Pretty friendly place. Daubert gave us a lot of samples. Try the tiramisu , dulce de leche or caramello chocolate crunch gelato. I also like mixing the mango sorbetto with any of the fruit flavors. Great service, great gelato! —JonasMari

2007-05-23 11:32:48   yes, as a frequent patron at icekrimski, the blonde guy who works there is very friendly (when he is the only one there); however, it seems like whenever there are two people working, he "lets" the other person do all the work (i know because i have seen it on more than one occasion, and my friends who come there can verify it as well). i don't mean to cause controversy, but i just call it like i see it. —JoyChu

2007-05-24 21:25:33   Went here today for the first time. There was only one girl working there, and it wasn't busy at all, so the service was prompt and attentive. We tried a couple of samples and then I settled on the cherry gelato that had plenty of cherry chunks in it. It was very good, and I thought the portion size was decent for the price. My fiancee had half strawberry, half something with a weird name that was effectively cookies and cream. She was very pleased as well. —AlexPomeranz

2007-05-27 17:06:03   This place is awesome. Come here next time you have a frozen dairy craving. The employees are very friendly and the gelato is excellent. —AmitVainsencher

2007-05-28 17:46:35   I finally went here for the lemon gelato, it was very good but seemingly not the best I've had (thought it's been a while). I'll have my dad stop by to check it out, he raves about lemon gelato from his old neighborhood in the Bronx. —EdHenn

2007-07-12 14:34:49   I'm a relatively frequent customer at Icekrimski (I go there about once a week), and it's quite tasty. The mango and guava sorbettos are amazing, and the child size is sufficient simply because of the amount of flavor that it packs. Of the gelato flavors, I'd probably recommend the creme brulee or the hazelnut. Yummy.

On another note, the service there varied depending on who was working. The two younger employees (the blonde haired guy and a younger gal) have always been very courteous, but the older lady that was working there (with the "useless guy" that others have mentioned) wasn't very nice. In fact, she seemed kind of pissed to serve me and my friends. Maybe she was annoyed that we got excited over frozen treats. —BrianMac

2008-02-01 17:28:41   does anyone else find it troubling that the employees here touch the cookie that goes into the ice cream, and touch your money, and everyone else's money, and do not wash their hands?? i believe that is a health code violation. —Chantal

2008-03-23 23:59:26   I like this place, they always pack you selected cup size full of the gelato. The pumpkin gelato is my favorite but another good combination is half chocolate and half banana fosters-tastes just like the chocolate dipped frozen bananas from Disneyland. —NtoWolves

2008-05-23 10:50:28   Went here last night for the first time. Pleasantly satisfied with service and delicious! I had the Caramello Chocolate chrunch and the Strawberry Fresca. The strawberry fresca was really good and my favorite of the two. —Jillep

2009-01-24 22:35:51   They have excellent limoncello poppy seed gelato. However, their hours are kind of wonky. I went in today to get some of my favorite gelato, and they weren't open. Their window had a sign posting that their hours were fri-sun 3:30-7:30. Pretty lame. I went to BOTH the co-op and nugget market to see what flavors of classico they serve and was bummed to find that they pretty much only carried vanilla, tiramisu, a mango kind and maybe one or two others. This place definitely has the best selection, but make sure you go when they are actually open. I think that at least on the weekends, they should be open for longer. —BrookeB

2014-05-09 02:46:29   The gelato has a wonderfully thick consistency and retains its flavour superbly, without the taste diminishing as you work your way through a serving. The mango is tart and fruity (like a chilly Gusher, but better!), and the honey lavender is sweet and tastes subtly like tea. Definitely allow the honey lavender the chance to perform its gentle work upon your tasting buds. —JaniceW