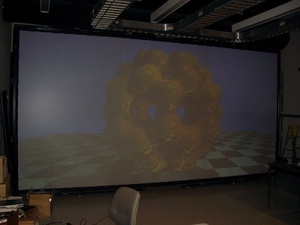 The Institute for Data Analysis and Visualization or IDAV (formerly known as CIPIC) is actually not just the graphics group as many people first think, but rather a research unit that encompasses several different groups.

This group is primarily working on sound related research, and has done much of the pioneering work in spatial audio techniques. Chances are, if you've played a computer game with 3D sound, you may have used some of their research. Incidentally, unlike much of IDAV, this group isn't located in Academic Surge, but rather in a building downtown (the same building in which Hunan is located). The primary researchers in this group are Ralph Algazi, Richard Duda and Dennis Thompson.

As the name would imply, this group is working in bioinformatics. Their focus is on gene expression, proteins, and cell metabolism. The primary researchers are David Bunch, Zelanna Goldberg, Kyoungmi Kim, Hongzhe Li, David Rocke and David Woodruff. I'm not as familiar with this group as with the others. Perhaps someone more knowledgeable than me could fill in some info here. - EricKlein

The first thing people always notice in the VR lab (and how could you not?) are the big toys.... um, I mean the VR equiment.

We have two primary VR environments.