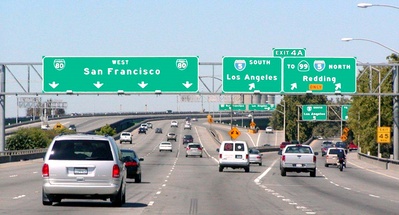 US Interstate 5 runs north-south all the way through California to Washington, connecting Mexico and Canada. It's the quickest road to get to Southern California. Known throughout much of it's length as I-5, the Southland has given this freeway several names. Known to the older generation which grew up during the opening of the Interstate as the Santa Ana Freeway, since it runs through Orange County. However, the majority of people who are acquainted with the named freeways of SoCal may still refer to it as the Golden State Freeway, as the freeway is more or less the artery of traffic in the state. But by far, the name most Northern Californians encounter is "The 5". More and more Southern Californians (especially amongst the younger crowd) are using this designation for I-5 and her sister interstates, which has been replacing the plethora of names that had been commonplace in the past.

The Freeway has only 2 lanes each direction except near large cities. The speed limit is 70 mph in rural areas though many drivers go much faster than that. I-5 is a major shipping route so the slow lane is generally lined with trucks.

The closest ways to get to I-5 are:

The closest spur route is I-505, which splits from I-5 north in Zamora, passes through Winters, and terminates at Interstate 80 in Vacaville. You can get there by taking Covell Boulevard or Russell Boulevard west into Winters.

The Sacramento International Airport is located just off I-5 in north Sacramento.

Go to West Coast Roads for more information and photos.

South of Davis on Interstate 5

North of Davis on Interstate 5