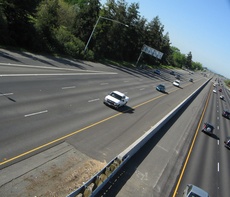 . I-80 is the main freeway going through town, dividing South Davis from the rest of Davis. Sacramento is about 10 miles to the east, and the Bay Area lies approximately 70 miles to the west. The freeway spans the entire continental U.S. (2909 miles)., starting in the West at its junction with U.S. Highway 101 in San Francisco and terminating in the East at its junction with Interstate 95 in Ridgefield Park, New Jersey. I-80 stretches for 180 miles inside of California.

As you travel toward Sacramento you will take the Blecher Freeman Bridge over the Yolo Causeway. Just before the causeway are the message rocks. Some people confuse this highway with Business 80.

Heading west on I-80 in a generally southwest direction from Davis the next towns are Dixon, Vacaville where the freeway enters the Northern Coast Range and goes through a pass to Fairfield.

AAROADS has a guide to Interstate 80 - California. 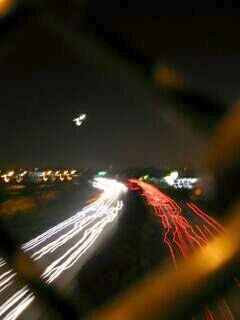 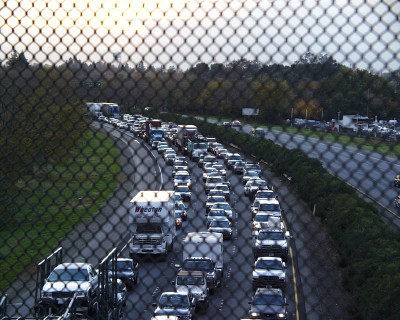 Oddly enough the freeway expands to 6 lanes before the Mondavi Center but then bottlenecks to 3 once arriving at the Richards Blvd exit. Both directions are much wider where the freeway runs through Campus; the same is true on Highway 113. Either the state got a good land deal from itself, or the University decided that it never wanted to deal with freeway construction ever again.

Friday nights headed eastward are bad for traffic. Usual locations for accidents are just east of Mace Boulevard and west of Richards Blvd.. If the causeway is blocked, an alternate (eastbound) path is County Road 102 (aka Pole Line Road) or Highway 113 north to Interstate 5 south. If you're in Sacramento and want to avoid the causeway, take Interstate 5 north toward Woodland and exit at County Road 102. Turn left at the stoplight and proceed straight. The road will eventually turn into Pole Line Road just south of the northern edge of the Davis city limits. See Area Maps for alternatives to Interstate 80.

See transportation for alternative ways to get to Sacramento or the Bay Area.

To view current traffic conditions on I-80, see the following websites: 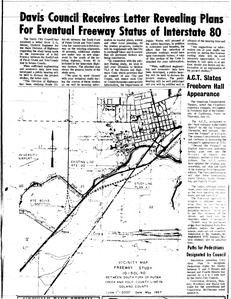 a 1967 Enterprise article shows a USGS map with the then-existing US-40 highway, and the proposed reroute as it was eventually built

The I-80 corridor was originally the US-40 expressway, which was built around Davis sometime between 1945 and 1960. The original routing was closer to the UC Davis campus between the Richards Boulevard exit and Old Davis Road exit, and went through a trench and under the railroad tracks. The routing followed Old Davis Road along the south side of the Arboretum, then under the railroad tracks.

The freeway was moved about 1000' south when US-40 was upgraded to I-80. The campus is incredibly fortunate that the highway planners did this, otherwise there would be no "south campus" — the Mondavi Center location would be located right next to I-80, and the parking garage and Mondavi Institute would be on the south side.

But, an opportunity was missed to move the freeway another 1/4 mile south. It wouldn't have cost any more, wouldn't have added any more distance to the Sacramento-Oakland drive, but would have opened up twice as much buildable land for the university between the freeway and the Arboretum. And the old underpass could have been retained to allow the campus to extend across the railroad tracks. Furthermore, if the freeway was put in a trench (as US-40 was) then the south campus would be fairly quiet, instead of having a 10-lane freeway towering over it.

Some opportunities were taken, but others were passed by. Message to citizens — make sure you look at plans carefully, and see if you can't move the lines around a bit to improve the outcome of the project. It costs nothing in the planning stage, and can result in huge benefits to the long-term quality of life. 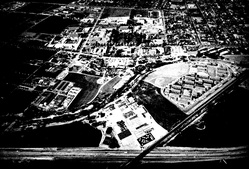 This 1963 aerial photo from the UC Davis LRDP shows the US-40 highway hugging the south side of the Arboretum and going under the railroad tracks. 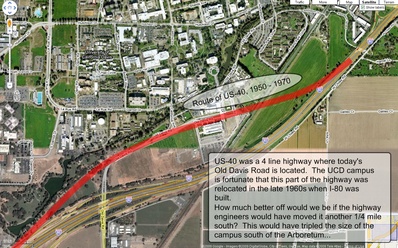 This 2005 aerial photo shows the existing I-80, with a red line where the original 4 lane highway was located 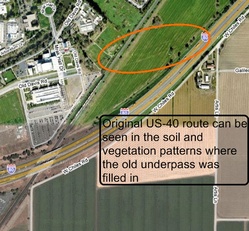 If you look carefully at the aerial photo, you can see the difference in soil where the old underpass was filled in 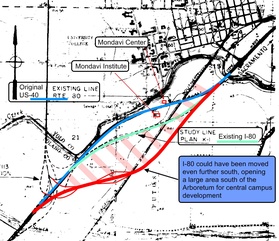 If the highway planners would have been a bit more clever, they could have opened up a much larger area for the UC Davis Core Campus

The following destinations can be reached without leaving I-80 (or not going far off of it).

See Adventures Outside of Davis for some other places I-80 can help you get to.

Right before I-80 hits the confusing Business 80/I-80/US 50 interchange in Sacramento, there's a sign displaying the distance to Ocean City, Maryland. 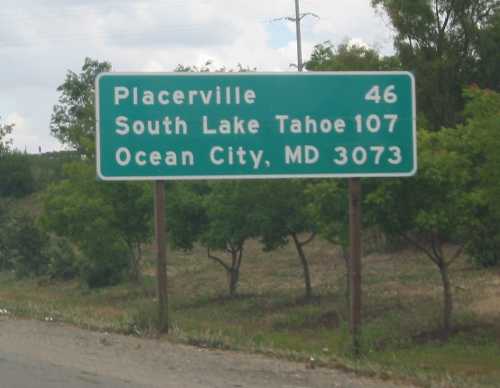 This sign is the official beginning of US Route 50. Originally, there used to be a much smaller sign that only had the distance to Ocean City. It was placed there partly because in Ocean City, MD, there is a sign that says "Sacramento 3073 mi." (I think the current indicated mileage of 3037 is incorrect; an idiot-proof trip on 50 will take you to Washington, D.C.!) So both ends now had a sign marking the beginning/end of 50. Unfortunately, the sign had to be replaced after twice being stolen by "some kind of fraternity club." Any attempts made to steal the current sign would have to be somewhat epic, likely involving a pickup truck and sawing the sign into quarters. Not that anyone's ever thought of such a thing, of course.

The Ocean City, Maryland sign is the basis for one of the acts of episode 191 of "This American Life", where a dude decides to drive across country after seeing the sign in question.

You don't have to go far from Davis in any direction to realize that we're in a geographically diverse part of the country.

You can read the complete history of Interstate 80 here.

Beautiful green hills can be seen not far west of Davis on I80. (early spring 2005)

2005-04-11 19:14:04   The current "Ocean City" sign has the correct mileage, it was fixed shortly after the replacement sign was erected. This page at route50.com talks about it. —RussBowlus

2005-10-06 13:59:32   I do not understand why the right lane (headed east) before the Richards offramp merges when there's room to make it an exit-only lane for Richards instead. It's ridiculous having to merge back into traffic just to get off at Richards when there's clearly room to run the lane all the way to the offramp. —AlexPomeranz

2007-04-02 17:24:47   Hey, thanks. I don't mind Richards, but I was looking for something like a bike path under the freeway. I haven't been in South Davis much, but I do know the bike path. How far down do I go to reach the tunnel? I was interested in knowing how to get to Oakshade Town Center from right around Olive where it bends and starts running exactly parallel to the tracks. —CaitlinMorrow

2007-06-28 19:32:45   Does anyone know about a correlation between driving on the 80 and getting a flat tire? It seems like I see people pulled over with tire problems every few miles between Davis and Sac. —Chantal

Two weeks ago, I rode my bike to Sacramento. On the way back, I got a flat. It happens, even on a bike. :( —WilliamLewis

2008-10-22 21:42:38   I think the unnecessary merge right before Richards has something to do with the county line being right there. It ends as if Solano paid to pave 4 lanes and Yolo only paved 3 and they didn't know how to join them. Would make life a lot faster with a little asphalt. —NotTires