Intrepid Readers Book Club meets the fourth Monday of each month at 7:00 pm.

This group of intrepid readers has been meeting for over fifteen years now. We were formerly the Avid Reader Book Club but we adopted a new name in January, 2022. Join us for some great reads and lively discussion. We read alternately fiction and non-fiction and are always looking for interesting books on and off the bestseller lists. We currently meet at Logos Books, 513 2nd. St. Davis and online. 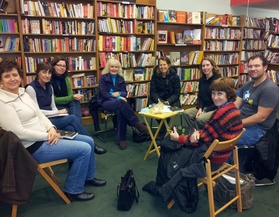 The Book Club ca 2012Note: Book selections subject to change. Be sure to check periodically in case a book gets moved to another month.

NO FEE TO JOIN

Book Selection: "The Vanishing Half" by Brit Bennett

Send me your email if you haven't already. We will send out a Zoom link a few days before the meeting.