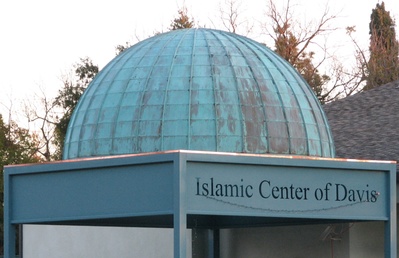 The Center offers a variety of services to Muslims in Davis. In addition to the Congregational daily prayers and the Juma' Prayer (Friday sermon), the Center works toward bringing together Muslims through various cultural and social activities. The center also strives to enhance the understanding of Islam among Muslims, as well as endeavors to make Islamic teachings known to interested non-Muslims.

The ICD has been victim to several incidents of vandalism, as well as hate mail. Although the police have painted these incidents as part of drunken mischief, others think the police are not taking these crimes seriously enough. In the most costly incident, the ornamental crescent that topped the blue dome was broken off and stolen. See source here. It should be noted that vandalism, especially theft, occurs quite often on Russell Blvd. Fraternities and Sororities often have letters stolen from their houses (surprisingly expensive to replace) even from rooftops. This may be related to the theft of the crescent making it questionable as to whether or not it was a hate crime.

The original mosque was established in 1982 by a group of local university students who desired a communal place to pray. They purchased a single-story house and adapted it for their needs. The number of worshipers eventually outgrew the small space, and the building was demolished in 2006 to make way for a larger replacement.

The current facility of 4000 square-feet opened its doors in 2008. It contains prayer rooms for men and women, a children's room, a kitchen, and a library. Visitors of all faiths are welcome.

The Islamic center was demolished during the week of 2006 May 29, in preparation for construction of a new facility.

2011-01-02 05:29:57   I think your comment is inaccurate Daubert...can you support? —WentToPatwin My comment comes from talking to members of this community, if you want to know more contact me

2011-06-21 23:53:46   At night when local frats get broken down by Police, this center is a popular site for underage drinkers to hide from the police —JohnathonJosephs

2011-10-03 10:51:52   Can't say who, because I'm not sure which greek group does it but there is definitely a pledge related theft of "emblem" type deal on Russell. It's probable that recurring theft of the crescent is due to that...especially considering the timing of the reports. Still theft, but not hate inspired theft. —OliviaY