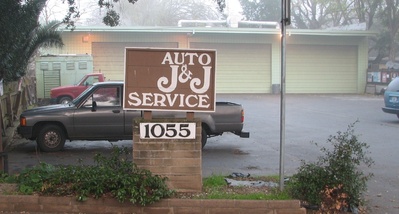 J&J Auto Service was established in 1961 by the local Jacobs family. It provides general automotive repair and computerized diagnostics in the Davis area. J&J Auto Service only services Japanese and American cars. It seems quite highly recommended by Wikiholics.

The elder Jacobs handed over the reins of the business to sons Bobby and Daniel in the early 90s. Bobby worked at the front desk for years, but finally left in early 2008. Daniel now runs the business; his children work in the front office.

What was your experience at J&J?

2005-02-03 18:07:09   These guys have always been real nice and helpful when I've talked to them, though I haven't actually had them do any service on my car. They once let me borrow a tool I needed in exchange for a beer. —JevanGray

2005-12-13 10:24:43   EXTREMELY helpful. Bob is very knowledgeable, and very friendly. I went in thinking I should get a transmission service, but he didn't just go do it. He figured out what was really wrong, fixed it, and sent me home with much more information that I could have asked for about my car. Taking the trouble-car back this week for much needed continued maitenance of issues! —JenniferLaFever

2005-12-13 20:57:41   I must echo that Bob is a swell guy. He was very helpful and his diagnostic of my car problems were spot on. He had my shit car running for longer than it should have. I'd have to say that this is the most unshady and friendly car maintenance place I've been to. AA+++++ Would deal with again —DatNguyen

2006-12-10 16:17:21   I had a very pleasant experience with someone here on the phone (maybe this "Bob" fellow?). I was looking to do a clutch on my ass 215k+ camry, and he gave me an estimate, along with all the other things that might be wrong. He was very informative and friendly. (I decided against throwing money at the stupid POS car. Anybody want an 88 5-speed Camry wagon?) —CaptainRush

2007-04-24 08:48:14   Thought I needed a new starter but turned out to just be faulty wiring. Bob and the gang were very friendly and helpful, I definitely recommend these guys. —PatrickHennessey

2007-12-16 16:39:42   When they get busy, you'll have to make an appointment. I had to wait 1 whole week to get a 15 minute diagnose/confirm the starter is busted. I'd go to Redfield if you want your car back fester with the same, if not more professional expertise. —KaiWan

2008-01-30 10:12:17   The guys at J&J have always been helpful and honest. I have been a customer since my days as a student in the late 90's, and I continue to go to them. They always seem genuinely interested in helping me and my car problems. —bryanjkim

2008-03-13 16:21:30   These guys were great as they charged me half what Speedy offered for the diagnostics alone. They were able to replace my fuel evaporation hose and checked the check engine light for the price quoted for the diagnostic. My car had previously failed a smog test and after their service it was able to pass. —GraceAn

2008-08-21 07:59:10   These guys are great. They changed my battery about 9 months ago for a good price and couldn't have been friendlier. Just a few days ago I brought it in for a list of odd problems . I got a call back later in the day and they thought I needed to get the IPC reprogrammed. They believed that would solve the problem but only the dealership could do that. They didn't charge me for preliminary checks on the car and even called the dealership for me, got a contact person there, and hand wrote directions to the dealership. Very helpful and knowledgeable, the girl confused the heck out of me over the phone about what was wrong with my car and I'm a Mechanical Engineer! —NickStrand

2008-11-04 23:02:20   Drastically over priced! I was charged over $200 dollars for a battery with instillation. Then it turned out there diagnosis was wrong and it was the alternator which I was charged over $500 for parts and instillation. Also, not a very professional place. The also got grease on my leather interior. I won't be using there services again. Although they were very fast on all there service. Probably too fast. —redhonor

2008-12-13 09:09:53   I've taken my car to J&J for the past two years and was always happy with their service. However, they have a new person working the front desk. The last time I needed a routine tune-up, he couldn't use the computer system to figure out what was required for a 60,000 mile checkup on a Honda Civic. It took days from the time I first made the appointment until a day after I left my car there for him to give me a quote. The cost seemed quite high($650), so I called over to University Honda and within a minute they had given me a quote for $250 less. What gives, J&J? I always had the ipression that their employees were capable and their prices fair until now. —BethGoodstone

2009-04-13 08:59:12   I thought they did a good job on installing my replacement side mirror. But, when I got home and tried to get out of my car, the door handle did not work. I tried again, nothing happened. I had to climb over to the passenger side and get out that way. I was furious that they allowed me to go home with my car in this condition. My handle was just fine when I handed over my car. I called them telling them my door handle was broken. They told me it would cost so and so dollars to fix. They said the technician was aware of the problem, but did not tell them until I left the lot. No apologies from them at all about the missed communication. I yelled at them, and they finally said they would pay for half of the fee. They told me the handle was old and just broke. But if you want to have an honest business, they would have fixed it for me right then and at least offer me a discount and an explaination that it broke when they were working on it. I would have been fine paying it full price if they were upfront about it. Shady! Good work, but horrible manners and way of treating the customers! Go somewhere else! —doggies9

2009-10-27 12:31:13   DO NOT TAKE YOUR CAR TO J&J. Not only did they take advantage of my 83 year old father, the repair they did could have caused a fire in the electrical system. They installed a 30 AMP Fuse in a 20 AMP rated fuse box. They charged my Dad $480 to repair his brake lights and told him if he didn't have the repair done he could cause an accident and lose his license. The "repair" they performed did not in fact fix the problem. I ended up taking his car to an electrical shop in Woodland who found a wire that was causing a short, that in turn was blowing the brake light fuse. They repaired it for $76. J&J used to be an honest shop, when the father ran the business. It's sad that the children are not following in their fathers footsteps. —jeanettenet

2009-11-05 12:52:27   Not good. Since the original owners/mechanics sold the business to younger family members and moved on, J & J's service has become poor and unprofessional, and their prices have increased. I enjoyed doing business with the prior owners and am sad I need to find another shop. —Popoq

Look now. It's closed; that's why. Davis Auto Works is located there now. (They do the repair type smog inspection.) (How's tennis?)