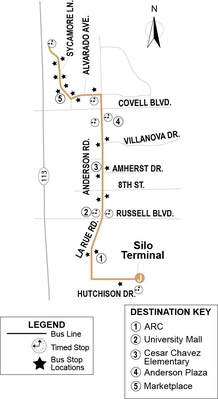 Considering that North Davis has the highest population density out of any area of Davis, it makes sense that this line has the highest ridership of all of the Unitrans lines and is subject to frequent overcrowding at peak hours. In 2004, there were over 800,000 one-way trips recorded on the former G Line (at which time it ran both to the Silo and MU Terminals). Passengers outbound from Campus who need the Anderson Plaza stop are encouraged to take the F line from the Memorial Union Terminal which is almost always less crowded and has a tendency to reach this stop first.

Extra buses ("tripper buses") are often sent out on this line in the mornings, to help pick up the most popular stops, such as the Almondwood, La Salle and the Synagogue (informally Church) stops. This helps keep the buses running on time, and the passenger loads down to a managable level. This is unfortunately not possible in the afternoons.

As of Spring 2012, Double Deckers have been put on the J-Line to alleviate passenger load issues.

Destinations on the J Line

The weekend J Line runs every hour, on the hour from 9:00am to 5:10pm with a 10-minute offset starting after noon. The route follows the regular weekday J Line route.