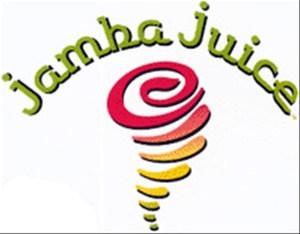 Jamba Juice has fruit smoothies, fresh squeezed juice, and more. They range from 250-330 kCal (for the same size), with 330 kCal/$3.50 being the best value. Their slogan is "Blend in the good." It was changed from "that felt good." 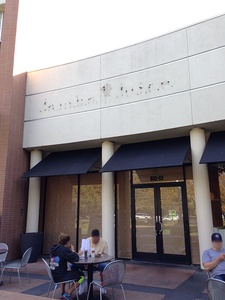 Former downtown Jamba, the remnants of the logo still visible above the awning.

A juice smoothie is excellent after a hot day bicycling across town. Or for a nice cool relaxing drink while studying for classes.

In 2009 they added pizza to their menu. Only they don't call it pizza, they call it "California Flatbreads" (perhaps pizza sounded fattening, or they wanted to distinguish themselves from the many pizza outlets). They offer three types, ranging from $3.50-$3.75. In 2010 they reformed their original Flatbreads to a larger 6 inch size, as well as improving the overall taste and quality of the product.

They also have oatmeal, sandwiches, wraps, and salads. In addition, they also have baked goods such as muffins, bread, pretzels, and bagels.

Sometimes they give out free samples to people who may be sitting around The Marketplace.

How to Order at Jamba

For the greatest efficiency, follow this quick guide on ordering. 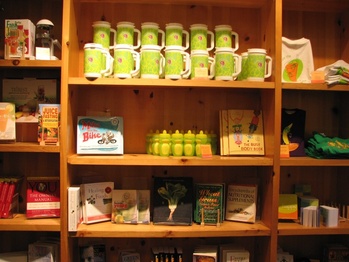 Some of the other products that they offer

How to Modify Your Smoothie: 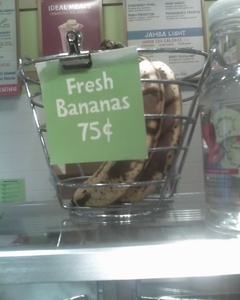 They also have "Fresh" bananas

Any smoothie at Jamba can be modified by the following commonly used methods:

At Jamba Juice, the person who is pouring the smoothie can't take your order. You would be surprised how many people try to order at the pour station. All orders should be directed to the individual at the cash register.

Secret Menu and Items of Interest

Most of these smoothies are probably available in Davis. Some of them are created from items not listed in the above ingredients. Ordering a "Pink Star" or a "White Gummi" or "Strawberry Shortcake" in North Davis or South Davis Jamba doesn't make the cashier bat an eye - it's all on the register. These secret drinks differ from the normally listed Jamba menu in ingredients used, the lack of the general fruity flavor, and even texture/consistency (depending which was ordered).

However, there are many names and recipes for the "Secret Menu" items that were created by the customer, but DO NOT exist in any Jamba Juice recipe guide (see the list above). If you ask for a "Now and Later" there is no recipe for it in the system, and you could be receiving a different smoothie every time. Most of these items are underground and word of mouth from long ago and it is hard to find remaining employees who know these. It is recommended that if you want to order one of the items listed above that isn't either a White Gummi, Pink Star, or Strawberry Shortcake know the recipe yourself, or else you may not get the smoothie. There are many combinations you can make, just make sure you know what you are getting, asking an employee for a "Sex on the Beach" can be offensive if they aren't aware of what you're asking for.

There is some confusion as to which Jamba Juice products contain dairy. According to their FAQ:

Does Jamba Juice offer dairy-free products? Why yes we do! All of our fresh juices, juice blends, and boosts are dairy-free. Any smoothie can be made moooo-free by substituting the dairy with soymilk or sorbet. Current dairy-free smoothies include: Protein Berry Pizzazz™ and Jamba PowerBoost®. Jamba’s Apple Cinnamon Pretzel is also dairy-free. Our products are not certified as dairy-free.

Does Jamba Juice offer vegan products? You betchya! Our fresh juices and juice blends, EXCEPT the Vibrant C Blend, are vegan. Jamba also offers two vegan smoothies: Protein Berry Pizzazz and Jamba PowerBoost. The Apple Cinnamon Pretzel is our only vegan baked good. Our products are not certified vegan.

However, the All Fruit FAQ implies that non-All Fruit brand smoothies contain dairy.

For the lactose intolerant and vegan the Jamba All Fruit smoothies are a great option because unlike the other Jamba smoothies they do not contain frozen dairy.

If avoiding dairy is important to you for health or philosophical reasons, it might be a good idea to call their customer service (1-800-545-9972) for clarification.

2006-09-30 20:41:07   The Jamba Juice near the Berkeley campus uses a type of paper cup instead of the normal styrofoam. I assume that the city requested or coerced that into happening. Is it possible that the ones in Davis could be required to do the same? —RyanPrendiville

2007-03-11 18:14:10   Jamba Juice uses Styrofoam (aka Polystyrene), they say it in their FAQ. Berkeley banned it, that's why they don't have them there. From what I've read it seems that paper cup biodegrade better, but polystyrene recycles with a lesser impact than paper cups if you have a program for it. —AlexKistner

2007-07-20 22:45:23   I've been having fun with the secret menu items. "Pink Star" and "White Gummi Bear" are both in the system - they just hit a button on the register. I ordered a "Red Gummi Bear" today - it wasn't in the system, looks like you need a cashier who knows what it is. She punched in the White version, then modified it: took out the peaches and mangoes, added in strawberries and raspberry juice. Took her about half a second to do it, I'm tempted to just ask what all the flavors in the system are. —EdWins

2008-09-28 16:13:52   i ordered a pomegranate paradise today and asked for no strawberries. i watched the person make my drink, add a scoopful of strawberries, realize his mistake, look around to make sure no one was watching, and serve it right up to me. not a huge deal for me because it was a taste preference thing, but if you have food allergies, i would watch out. —CandiceWang

2008-12-03 20:07:29   As much I love drinking Jamba back in high school, I don't drink it anymore now as an undergraduate. WHY? I totally agree with -JackHaskel, the bulk of jamba juice is mostly sorbet (fattening plus artificial fruit flavors) & sugar water (too sugary). This is just a friendly reminder to all... it's ok to enjoy it sparingly but way too much excess sugar in 1 drink. Other than that, Jamba usually has good customer service & the one in DavisCommon is bright & tidy like most Jamba Jucie chain stores. —AlyceeLeung

Until the 25th of this month, you can buy one and get one free! —hankim

except this one time an employee acted like a total snob and asked me what is suppose to go in the white gummi. and i was like, "well idk, that's YOUR job, not mine." and he told me that for my own good, i should know what goes in a drink or else etc etc etc...i was so hot and tired that day i did NOT have time for his crap. sometimes little things can piss you off at the wrong moment, and that was definitely one of them —emme

2010-12-09 11:30:34   Just an FYI to customers who want a "Secret Menu" item, there are only 3 options that have set recipes. The White Gummi, the Pink Star and the Strawberry Shortcake. Every other option, such as the "Red Gummi" or the "Green Gummi" you need to know the recipe for. After working there I heard 8 different recipes for the "Red Gummi." After asking a customer if they would like the typical Red Gummi recipe, they corrected me and said "That's not correct." Being corrected on something that doesn't exist is extremely idiotic. Anyone can walk into an In & Out and ask for a Big Mac. You may get a hamburger, but since they have no recipe for it, you'll never know what your getting.

If you want to try the "secret menu" smoothies, find the recipes online and bring them in, and ask for those ingredients exactly. If you as them for a Sour Patch Kids, you're asking for too much. Aren't there 4 different flavored Sour Patch Kids candies anyways? Same with Skittles, You asking for the Purple Bag? The Red or Blue Bag? Know the recipe yourself and you will get the same smoothie every time. If you are allergic to an ingredient and you get it in the "Red Gummi" it isn't the fault of the smoothie maker, It is your fault that you didn't know what was inside of it when ordering it. —JeffDurand

2013-06-06 10:52:48   im planning to open my own business out of the US and its the same concept as jamba juice, is there someone who have worked there before or just knows what machines they use to make smoothies, juices, etc. All the basic information I should know.. thanks! —joseelias

2013-12-31 15:39:22   I'm wondering if anyone really knows why the commons location closed. It says on the wiki that the corporate headquarters elected not to renew the lease but what we were told was that Whole Foods outbid them because WF wanted a bigger space, in which they could offer smoothies. I care because I want to know if WF is predatory, similar to Walmart, in driving out competition. —JaneBF

2014-01-25 06:35:12   while it might not be overly neighborly, I wouldn't consider Jamba a mom and pop store. I thought it was well known that WF was coming into Davis into a small sq foot location and that they desired to expand as leases turned over. Seems like the the market operating as intended. —loneshark