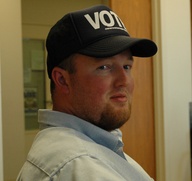 James Schwab was the 2006-2007 Director of the ASUCD Campus Outreach and Organizing Office. He was the 2005-2006 ASUCD External Affairs Director which then became the 2006-2007 Secretary of External Affairs in the office of the ASUCD President. He was also the 2005-2006 activist intern for the Women's Center and worked at the ASUCD Coffee House from August 2005 to March 2007. He is a former campaign manager for LEAD. He had planned to run for ASUCD President in the Winter 2006 ASUCD Election but his academic probation status and financial situation caused him to drop out.

Before his heavy involvement in ASUCD James was the former President of the Davis Campus ACLU, the Vice-President of the Yolo County National Organization for Women. He was also active in Aggies Beat Bush and the Progressive Coalition of which he helped re-start. Before UCD, James was a board member for the Northern California ACLU.

On November 11, 2006 Schwab complimented then ASUCD Senator Kareem Salem and ASUCD Business and Finance commissioner Julie Hooper as the obvious choice for ASUCD President and ASUCD Vice President under the LEAD ticket. Shortly after the announcement of the Fall 2006 ASUCD Election winnings LEAD campaign manager Schwab stated that LEAD still held a majority of Senate and that LEAD had ran a clean campaign. On November 21, 2006 ASUCD Vice President Genna Carnes criticized Schwab for his comments made shortly after the Fall 2006 ASUCD Election in which Schwab claimed Student Focus candidates won due to their attractiveness. That same day Schwab apologized for his remarks.

2006-10-19 19:05:15   I just wanted to say that is is very unfortunate you had to drop out of your race to become ASUCD President. I don't really know you, but from what I've seen you are a very active and dedicated member of ASUCD and on campus. You certainly deserve to hold the top position. —StevenLee

2006-12-10 21:41:25   "We will SPAM the Internal Affairs Commission with useless bills." Nice addition to the ACT platform, though I'm sure they were planning to do that even if they didn't run on it. —PaulHarms

2007-12-21 21:04:50   Schwabbins used to be cool. But then he challenged current CoHo employees to a keg race against CoHo alumni. The alumni will be crushed. —AriFeinstein