Jeremia Kimelman is a candidate for ASUCD Senate in the Winter 2009 ASUCD Election running as an independent candidate.

Jeremia is an honorary member of the Friends Urging Campus Kindness slate, for taking on both the goals and philosophy of this former slate. 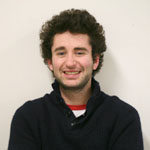 What be up, Aggies? My name is Jeremia Kimelman and I am a third year political science major. I am running for ASUCD Senate because I want to throw a huge, fat wrench into a system that I think is broken. Over my past two years in ASUCD I have been a commissioner on the Gender and Sexuality Commission, the Campus Safety Coordinator, the legislative director of ASUCD Lobby Corps, and once upon a time I worked on the elections committee. Here's the deal: I was working for elections trying to get regular students to vote in the MU, and the most compelling reason that people should vote in ASUCD, I was told, was because way back Rob Roy put some staplers in the computer lab. Woop-de-doo. I mean, I do use those staplers ALL the time, but if that is the absolute, most compelling reason why people should care about ASUCD, then we're all in some serious trouble. These people get 50 dollars a week from your student fees and what do they have to show for it? I would like to use my Senate salary, if elected, to start a scholarship to help students who are strapped for cash to pay for their quarter. The almost 1300 bucks that I would get over my term could really help somebody put a huge dent in their bill, especially with Cal Grants being cut.

Furthermore, I want to take back the campus for the students. Did you know that on top of our beautiful MU is a patio that students were once-upon-a-time allowed to eat on. With the CoHo under going construction soon, how amazing would it be to have food up in the sky on top of the MU? What is up there right now, you ask? Well the all-knowing, all-powerful administrators over at Campus Unions decided that instead of students having a great time up in the clouds, the space should be used to store some paper towels and trash cans. Oh yes, this whole situation reeks of common sense, administrator-style.