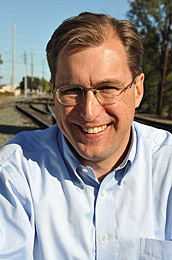 Joe Krovoza was the Mayor of Davis from January 2011 to July 2014. He was elected to the Davis City Council in 2010 and has served as Mayor since January 2011. In May 2013 he announced his candidacy for California State Assembly to represent Assembly District 4, which includes Davis.

Mayor Krovoza presides at the Davis City Council meetings and coordinates the priorities of the City Council’s agenda with his councilmember colleagues, the city manager, and the city attorney. Joe Krovoza is the city’s representative to the board of the Sacramento Area Council of Governments (SACOG) and he serves as the Chair of the Woodland-Davis Clean Water Agency JPA. Joe is also a primary city liaison to the Davis Joint Unified School District as well as a number of city commissions.

Joe was elected to the Davis City Council on June 8th, 2010 with more votes than any of the other candidates in that election (8,696 votes, 37.7% of all votes, 59.3% of voters cast a vote for him). This led to Joe assuming the role of Mayor Pro Tempore for the first two years of his four-year term. In early 2011, however, then Mayor Don Saylor vacated his uncompleted term on the Davis City Council to assume a seat on the Yolo County Board of Supervisors. On January 4, 2011, Joe was elected by his colleagues to fill the remainder of Saylor's mayoral term until June 2012. Joe continues to serve as mayor from June 2012 until June 2014 based on being the top vote-getter in the 2010 election.

In May 2013, Joe announced his candidacy for the California State Assembly to represent Assembly District 4. This District includes all of Napa and Lake Counties; part of Sonoma County including Rohnert Park; part of Colusa County including Williams; northern areas of Solano County including Dixon; and Woodland, Winters, and Davis in Yolo County. Mariko Yamada currently represents the 4th District in the Assembly, but she is unable to run for an additional term due to term limits.

In his announcement, Joe wrote:

“I have led Davis as mayor since January 2011 and have learned much about the interplay of local, regional and state government, and what it takes to bring people together to solve our most challenging issues. As you know, I am passionate about sustainable fiscal and environmental systems, the value of education, the need to both celebrate and respect our differences, and the imperative to address climate change through clean energy and improved transportation systems. I am exceptionally proud of our accomplishments in Davis during these recent and trying economic times.

Through my day job at UC Davis’ Institute of Transportation Studies and Energy Efficiency Center I am privileged to work with some of the state’s most innovative minds, and I know I can continue to translate our collective expertise into effective policy. I would relish the opportunity to bring these experiences to the California Assembly…"

The primary election will be held in June of 2014, which corresponds to the end of Joe’s term as Mayor.

Campaign updates are at joekrovoza.org. Joe's endorsements include statewide environmental groups (including the Sierra Club and the California League of Conservation Voters), diversity organizations (including the Northern California Latino Democratic Club), and independent newspapers (including the Sacramento Bee and the Davis Enterprise), among others.

Joe Krovoza is a Democrat running for the State Assembly in the 4th District.

His commitment to public service started over 30 years ago, when he served as the student representative to the board of trustees while attending community college. Joe went on to serve seven years on the California Student Aid Commission where he fought for students and against higher tuition.

In 1991, Joe and his wife, Janet, moved to Davis where Joe attended law school at UC Davis. They remained in Davis to raise their two daughters, Charlotte and Lillian. Joe went on to work as an environmental lawyer specializing in water law before joining UC Davis in 1996 to help build the campus’s Institute of Transportation Studies (ITS) and Energy Efficiency Center (EEC).

Both UC Davis centers are national leaders in green technology and play vital roles in designing and analyzing initiatives on zero emission vehicles, low carbon fuels, vehicle use, and reducing sprawl. As their Director of External Relations, Joe has played a pivotal role in both centers’ expansion with the ITS recently being named the National Center for Sustainable Transportation by the US Department of Transportation, and the EEC’s newest joint project with community colleges to expand workforce training and create jobs in energy efficiency technologies.

Joe was elected to the Davis City Council in 2010 and has served as the Mayor of Davis since 2011. As Mayor, Joe has made some tough decisions to improve Davis' financial position. These decisions have put the city back on firm fiscal footing without deep cuts to city services.

Joe has forged relationships between the City of Davis, the local business community, and UC Davis to boost economic development and help create jobs, including the crucial early support he provided Davis Roots, a non-profit start-up business accelerator.

Joe is a life-long environmentalist who led the Putah Creek Council for seven years where he worked to restore the creek's historic salmon run and initiated a permanent restoration program. For these efforts Joe received Davis' Environmental Recognition Award in 2001. Joe is a strong advocate for open space and wildlife protection, and an avid utility bicycling advocate.

2011-08-26 00:46:05   My neighbor also went to Bosco Tech before you did. He thought it was beneficial. One interesting story was that his father had been a doctor who was consulted by the magician Harry Houdini after he was fatally injured by an unexpected punch to his stomach. —BruceHansen