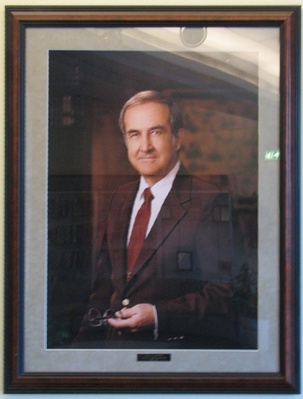 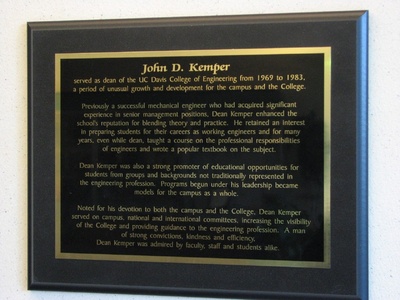 John D. Kemper was the second dean of the College of Engineering, serving from 1969 to 1983. Kemper Hall is named for him and there is a huge portrait of him in the lobby.

Kemper came to UC Davis in 1963 as a professor in mechanical engineering. He wrote a book on engineering called Engineers and their Profession. A copy of this book can be found in the glass display case in the lobby of Kemper Hall.

In 14 years as dean of engineering, Dr. John Kemper built up a very strong program at the College of Engineering of the University of California, Davis, and made impressive contributions to the progress of engineering education.

A native of California, he attended Ventura Junior College and worked for Lockheed Aircraft Corp. before entering the Army Air Corps during World War II. He earned his B.S. degree in 1949 and his M.S. in 1959 at the University of California at Los Angeles in engineering, and his Ph.D. at Colorado University in 1969 in civil engineering.

Before joining the faculty of the University of California, Davis, in 1962, Dr. Kemper was a design engineer for Telecomputing Corporation, chief mechanical engineer at the H. A. Wagner Company, and vice president of engineering for the Marchant Division of SCM Corporation. He has been a member of the UC-Davis faculty since 1962 and was dean from 1969 until his retirement in 1983.

What he's doing now? I think someone said something about him retiring to Oregon.