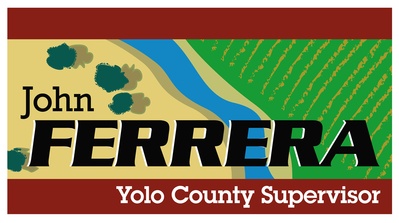 John Ferrera is a candidate for the fourth district Yolo County Supervisor seat.

John is currently the Chief of Staff to California State Senator Denise Ducheny.

The People's Vanguard of Davis interviewed John on Wednesday, September 26th 2007 regarding his candidacy.

John next served as a staff member in the U.S. House of Representatives from 1989-1999, working almost exclusively on Transportation and Infrastructure Committee legislation for Representatives Robert Roe and James Barcia. His work included helping to develop the Intermodal Surface Transportation Efficiency Act (ISTEA), National Highway System Designation Act and Transportation Equity Act for the 21st Century (TEA- 21), historic legislation that put in place the federal road and transit construction, environmental quality and mitigation and funding distribution structures that exist today.

In 1999, John was appointed to the position of Assistant Secretary for Transportation. His primary assignment during his five-plus years at the Agency was oversight of the California Department of Transportation (Caltrans), where he worked on transportation and infrastructure policy and funding, budget and legislative issues.

John continued his career-long interest in transportation and environmental issues representing the BT&H Agency in the State’s continuing dialogue with local, regional, private and public partners to promote better environmental performance through planning and responsible development in California. In addition, he was one of the Schwarzenegger Administration’s key policy advisors for the development of the Governor’s proposal to create a bond program to reverse decades of underinvestment in the State’s aging infrastructure, a plan which contributed to the Legislature and voters’ approval of the $43 billion bond package in 2006.