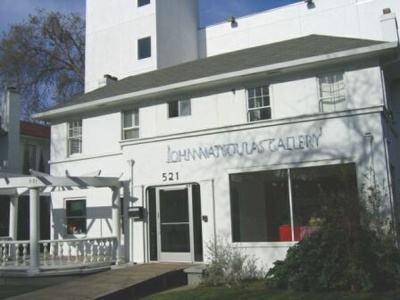 Anyone is welcome to walk in whether they are looking to purchase art or not, so don't feel uncomfortable about going inside. Many people treat it as a museum with free admission. All art galleries are like this. Come back often because the shows changes nearly monthly. You can check out what they're currently showing on their calendar.

2nd Fridays— 7pm-10pm Opening Reception + 2nd Friday Art About The John Natsoulas Gallery holds it's openings to coincide with the ArtAbout on the second Friday of the month. They usually have live music and refreshments during their openings.

This newly remodeled building (a former fraternity house) has the Rosetta Cafe, a small bookstore downstairs, and four floors of art (five counting the roof). Be sure to visit all of the floors because the artists featured on the different floors are often very different. Also, be extra sure not to miss the back staircase. It is covered floor to ceiling with beautiful paintings and affordable art.

Personally, John especially likes Jazz music and figurative expressionist art -though he appreciates a wide variety of genres and is open to all forms of art. Not just the visual arts, but the Arts in general. 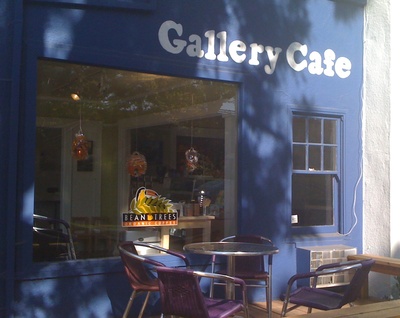 There is an outdoor patio and rooftop for the guests of the gallery.

The John Natsoulas Gallery sponsors more events than any other Davis Gallery. These have included:

John Natsoulas was alleged to have sold forged paintings in order to fund his gallery's 12,000 foot, $1.5 million expansion in 2000, according to a front-page October 15, 2006 article in the Sacramento Bee newspaper. Natsoulas settled a 2005 lawsuit with Henry Villierme, a once-famous abstract painter, who claimed that Natsoulas sold his paintings as works by the famous Richard Diebenkorn by forging Diebenkorn's signature on Villerme's work. Neither Natsoulas nor Villierme would comment to the Bee regarding the settlement, but others involved in the case backed the suit's allegations.

Fresno collector George Blair said he received the fraudulent paintings from Natsoulas, including one used as collateral for a loan he gave Natsoulas to fund his expansion. Blair said the paintings were bought for $175,000 and $180,000. The faux-Diebenkorn paintings were so well-done that no one questioned them until Villierme's son saw an advertisement for them. However, Blair does not believe that it is conclusive that Natsoulas himself forged the signatures.

Many of the events are free or charge enough to cover costs. John is a businessman, but he also cares greatly about building the greater Davis art scene -this shows in the plethora of events he holds. —SteveDavison

Beware about doing business with John Natsoulas. He has a well-earned reputation around Davis as someone who does not pay his debts. I am the owner of a small Davis business who provided a service to the John Natsoulas Gallery for an agreed-upon fee, and with a signed contract. John refused to pay his bill after the services were rendered, and treated me with extreme disrespect when I asked that he remit payment. Beware of doing business with John Natsoulas. I would strongly advise anyone to collect payment before providing John with a product or service. — BujhaGee

The UC Davis Ceramics department no longer attends, nor has anything to do with Mr. Natsoulas' premier event - the CCACA. — ChuckFrank