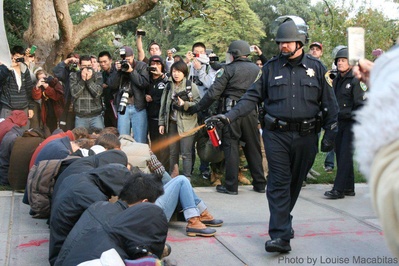 Soon to be Mall Cop, John Pike hard at work, keeping students safe. Photo by Louise Macabitas, used with permission. John Pike ("Pepper Spray Cop," "Pepper Spraying Cop" or "Casually Pepper Spraying Everything Cop") was a lieutenant in the UC Davis Police Department. He gained notoriety for pepper spraying peaceful, sitting protesters during the UC Davis protest on Friday November 18. There is a petition to charge him for his crimes in the incident. He was placed on paid administrative leave after the incident (the main difference between this and "a vacation at taxpayer expense for his troubles" is that one has a job after vacation, and may not after leave).

John Pike's employment with the University ended on July 31, 2012. On August 2, 2012, the Sacramento Bee obtained documents showing that 1) the internal affairs investigation into last November's pepper-spraying controversy at UC Davis concluded that Lt. John Pike acted reasonably, 2) a subsequent review concluded he should have faced demotion or a suspension at worst, and 3) despite those recommendations, Pike was fired after UC Davis Police Chief Matt Carmichael rejected the findings and wrote in a letter to Pike that "the needs of the department do not justify your continued employment." According to the Davis Vanguard, Cruz Reynoso stated, "The conclusion [of the internal affairs report] is 100% wrong. And I think the decision of the police chief to fire him was correct."

The Yolo County DA's office declined to file criminal charges against Pike or Lee for their actions on November 18. In the summer of 2013, Pike was awarded a $38,056 workers comp settlement for psychiatric injuries relating to the pepperspraying event. This is eight thousand dollars more than the students he peppersprayed got in compensation from the University.

He used the following quote in his email signature while he was an employee of the University: "The only thing necessary for the triumph of evil is for good men to do nothing." —Edmond Burke 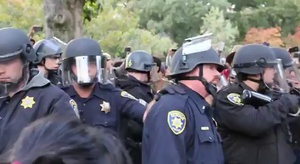 "I hope I’m not the scapegoat for this one." — John Pike

"Our line that they pepper-sprayed was ... one-person-deep. One of the officers began to remove us physically without the use of weapons. And Lieutenant John Pike ordered them to stop, raising his pepper can and saying ... 'Leave them. I want to spray these kids.'"1 - William, eyewitness protester

Most people were startled by the casualness and callousness of Pike's actions (which led to the subsequent internet meme), but as the protested chanted "Shame on You" and the riot cops back away with Pike maintaining his place on the frontline, another officer placed a comforting hand on Pike's shoulder and Pike can be seen either appearing dejected — or at the very least circumspect about the upcoming response to his actions — for a brief moment. This moment can be seen in this less-viewed youtube video. Another interpretation of what is happening in this video: another officer firmly pulls Pike away from the crowd and behind the line, and even after he is reluctantly pulled away, he still brandishes his pepper spray can a time or two, as though he weren't quite done. It is possible the officer pulling him back is of the same mind as a few (at least two) ex-UCDPD officers that have publicly condemned the spraying, but Pike appears to be somewhat mystified by the reaction of the crowd chanting. On an unrelated note, earlier in the video (in which the still on the left is taken from) two officers can be seen hovering over protesters who are on the ground, screaming in pain, but the two officers just stand there holding their batons nervously, as though violence were going to erupt from the downed protesters any minute. It speaks to the attitude that the campus police went in with, i.e., they went in expecting violence.

Pike has previously been given a Meritorious Service Award for subduing a UC Davis Medical Center patient who was attacking another officer. He was also part of a lawsuit against the university for calling an openly gay officer an extreme homophobic epithet. He is a former member of the U.S. Marine Corps.

His public declaration is visible here.

On November 18, 2011, several observers on the UC Davis Quad took photos of John Pike. There are many excellent, copyrighted images of the Incident, such as those by Davis Enterprise photo editor Wayne Tilcock. A few have used those to create new images, but the Internet meme is predominantly based on a photo taken by Louise Macabitas. The Internet meme is called Pepper Spray Cop, or Pepper Spraying Cop or Casually Pepper Spray Everything Cop. Lt. Pike quickly became a viral sensation; here is a gallery of images that depict Pike blowing pepper spray in the face of Mario, Papa Smurf, Mufasa and many more. He was apparently even made into a thanks giving ice cream cake at Baskin Robbins. Davisite-in-exile Rob Roy made a parody of Lady Gaga's "Poker Face," entitled "Pepper Spray", sung from Pike perspective with many photos of the protest and the meme. 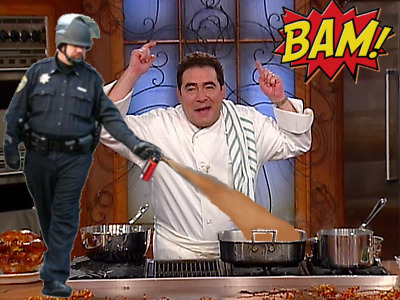 The (now famous) photo by Louise Macabitas is used on DavisWiki with full permission, and she's allowed anyone to use the image as long as they attribute it to her.

It was wrong, but there are those besides Annette Spicuzza who say it was ok. —BruceHansen

2011-11-20 23:39:37   To some extent I agree with Mateo here. There is a legal system already in place for dealing with crimes like this one. If the legal system refuses to cooperate, the solution is not vigilante justice but demanding a change in the legal system.

Furthermore, vigilante justice would be useless. Our enemy is not any one individual police officer. Even if he is barred from wearing a badge ever again there are others who would take his place. Our enemy is the system that allows, perhaps even encourages, such attacks to happen in the first place. Treat the disease, not just the symptom. —BarnabasTruman

No pay, but I'm sure you can get three hots and a cot. —WilliamLewis