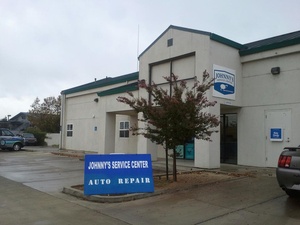 Johnny's Service Center is under new management. They provide full service automobile repair and service both foreign and domestic vehicles, factory warranty maintenance, computer diagnostics, tune-ups, timing belts, oil change, air conditioning service, brakes, transmission and clutch work, electrical, runability and cooling system service. Additionally, they are a star certified smog test and failed smog repair facility. Johnny's can also inspect your boat and boat trailer and make repairs or provide maintenance to help you get prepared for a summer on the water. Johnny's offers local customer transportation and after hours drop off. There are often discounts on the Johnny's website for service. Johnny's has been family owned and operated since 1960 and is ASE certified.

How would you describe your experience with Johnny's?

They towed my solar-powered motor home to Bernard's for $80. I'm going to have to sue the other party's insurance company to get my money back, but Johnny's did a fine job, and I didn't smell like ham afterward, so next time my motor home gets hit by a crazy Davis sports-car-driving yuppie I'll be sure to call Johnny's. —Graham Freeman

2006-02-16 07:42:55   They totally tried to overcharge me for some engine work. I was told (after the $160 or so engine diagnostic) that I needed to spend $1200+ to get my ignition coils replaced on my SUV. I took the vehicle to Goodyear Tire Center for a second opinion, and after their $85 engine diagnostic (which ended up being applied to the final repair cost so I didn't actually pay it), it turned out that I only needed to pay aoround $300 for new wiring, and the coils were fine. Avoid for repairs if you can! (Though, the guy at Johnny's did mention that they have a student discout. Unfortunately, I'm not a student...) —PenguiN42

2006-02-16 12:21:36   We've had our oil changed there frequently, and just took our car in for a brake repair. The diagnosis was spot on and the price was less than we expected. So for simple repairs, I find them trustworthy. —MattJurach

2006-04-23 18:20:08   Went to Johnny's at their old location on Olive Drive. I thought I would try them out for an oil change. I had a coupon, figured if they did a good job, I'd throw more business when I really needed work done. I had an appt first thing Monday morning, no one ahead of me and it took an hour. What got me really steamed was that I saw a bunch of their guys just hanging out and talking about their weekend or something. That was the last time I went to Johnny's and that was 5 years ago. The only reason I'd use them is for my AAA towing. Go to Advanced Auto instead. Friendly and accurate, been there for the last 5 years. —UsetheForce

2006-06-05 09:42:21   I got my car towed to Johnny's (after working hours) when it wouldn't start. The next day (Saturday) they called and said they couldn't see promise to see it until the following wednesday and a diagnosis would be $176! I am now going to take it to Davis Automotive Works on Olive, where I got my alternater fixed a few months ago, where the diagnosis fee is only $80. Shane, from Davis Automotive, is really nice, and willing to explain all the costs to you. I don't know why I got it towed to Johnny's!!! —AliceSaurus

2006-11-07 23:14:27   Their mechanics are not competent enough to do anything bigger than an oil change. They charge $190 for two hours of diagnostics and do not guarantee that they will find the problem. The VW dealership in Vacaville charged me only $80 and then waived that fee when I agreed to have them fix the problem. —MarcusLastname

2006-11-07 23:29:42   I wish I had seen this page before going to Johnny's. My experience with them was awful. I visited Johnny’s because my car was having intermittent engine problems. They repaired a bunch of problems that I didn’t need fixed. But the original problem, two weeks and $700 later, was still not fixed. And their mechanic refused to accept any responsibility for the botched job! —SilentBob

2007-12-18 04:40:57   I've had my car towed twice through AAA, both pleasant experiences. Once I had to have my battery replaced, they came in under quote, hurray! Then I brought my car in for a smog check, they charged me $20 for some special gas cap they claimed I needed, nothing actually in the car, the little thing you twist and take out when you fill up. I'm not a car expert, but I'm pretty sure that was hogwash. There are cheaper places to get a smog check. —Carley

2008-05-03 17:54:17   I cant comment on your smog service, but it is not uncommon for a car to fail a smog test due to a bad gas cap. The smallest ammount of gas vapor that escapes past the cap will cause the car to fail. You usually cant diagnose a bad gas cap by looking at it, it will appear completely normal. You just have to trust that the shop is being honest with you. —Nathanial

2008-02-20 11:42:03   Towed my car back to Davis from the causeway where I had tire issues. The driver arrived in 20 minutes, just as he promised on the phone. Reasonable rates, and friendly service. No complaints. —CameronYoung

2009-06-09 11:11:30   If you get your car repaired at Johnny's, get RJ to do it. He is nice, honest, and will explain everything that he is doing. If you talk to Rick or one of their managers, they are essentially saleman that try to get every last penny from you. I am satisfied with the towing experience and with RJ. —MedievaLW

2010-05-09 13:43:56   Unbelievable. These guys are crooks. They will skirt the line of the law regarding estimates, and over charge you for work that doesnt need to be done. Never ever have your car towed to this shop. I am amazed they are still in business. —ahatheway

2010-09-11 14:13:35   I went to this place to get my A/C fixed, because it's across the street from my apartment. BIG MISTAKE. They seemed great at first. They told me the main manifold hose of my A/C was in really bad shape, and made it seem like that was probably the reason it wasn't working—suggesting that I might not have to get my A/C replaced entirely. The part replacement was about $130, but the grand total cost, including all the wasted freon that leaked out during the process of seeing if the 'fix' worked, was over $500! Then they told me that the A/C would have to be replaced anyway, and they could do that for an additional $900. The real mistake I made was trying to do this without consulting my dad, who was in the automotive business for over a decade. Turns out this is the same scheme my dad saw Sears auto repair centers doing all over southern California twenty years ago to swindle unsuspecting customers. Do NOT trust these guys. They seem nice enough, but they will charge you every dime they can. I took my truck down to San Diego, and my dad got the A/C completely replaced for just under $400 bucks all told. Johnny's was a TERRIBLE WASTE. —kawende

2010-10-27 18:22:30   This shop replaced my front rotors and pads. A few days after having the work done, my front brakes started squeaking. I felt they over charged me for the work they did, but I took my car back to them yesterday so they could fix whatever they didn't do right the first time. BAD IDEA.

I received a phone call from them telling me that everything with the brakes looked fine. Apparently, they couldn't find the problem and didn't hear any squeaking , but if I wanted to I could replace "the hardware" on the brakes and maybe that would stop the squeaking (that only I could hear). They specifically told me that sometimes the hardware on brakes needs to be replaced, but mine looked fine, so it was just a wild guess in terms of a fix. I told them that if the hardware looked fine then it didn't need to be replaced. So as far as they were concerned, there was no squeaking and no problem. They told me that sometimes brakes just squeak. ( In the seven years I've had my car, the brakes have squeaked twice- once when the front rotors were not resurfaced correctly and second, after my car came out of this shop).

I haven't heard any squeaking since yesterday, but now there's a new problem: I'm missing a hubcap. I noticed this yesterday when I was back home so I went in this morning to get my hubcap back. I told them they had forgotten to put back all the hubcaps and that I was there to pick it up. They told me that they hadn't forgotten to put it back on, that it probably fell off. I asked them why it would fall off and they said because it was broken.

According to them, two of the hubcaps were broken and bound to fall off anytime. It's funny how my hubcaps weren't broken after the first time they worked on the brakes (nothing about broken hubcaps is noted on the invoice) , but the second time my car leaves the shop, two hubcaps are broken and one is missing. And magically, this is noted on my invoice.

2012-05-16 10:54:23   So approximately 10 months ago I had them replace my starter. $350. 8 months later, the starter broke. $240. This was aggravating enough, but lo as I go to start my car this morning it makes a very, VERY familiar "click." Last time they fed me some bullshit about how the starter's drawing the wrong amperage from my battery (herpaderpaderp that means you've got the wrong starter or I have the wrong battery and YOU SHOULD BE ABLE TO TELL ME WHICH). Frankly, this is absurd. I went there because it was my dad's friend, but now I'm going to ask for my money back from the last repair and find anyone else to fix my car. —JamesMcCardle