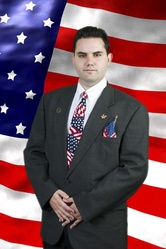 Joe Harney was a Justice on the ASUCD Court, confirmed on December 8, 2005. He was an unsuccessful candidate for ASUCD Senate in the Fall 2005 ASUCD Election on the United Student Alliance slate.

He garnered the "most hated person" designation during the Fall 2005 election, not only due to being eliminated first, but also getting 97 rankings of #13, which is the most last-place votes of the election (an honor formerly held by RevChad for two elections). He is also ASUCD's most hated man in another sense for stopping the seating of the candidates: Harney filed the elections complaint which delayed the seating of the new Senators after the Fall 2005 election. It is for history (and the other members of the Court) to decide whether the actions of ASUCD officials was the right one.

Hello, My name is Joseph Harney, and this is why you should vote for me as your ASUCD Senator. As a returning transfer student, I have had experiences in my life that will enable me to make the best judgments for the students of UC Davis. At my community college I have had the privilege of participating in Student Government in a different forum than the one practiced here in Davis. This gives me the unique advantage of experience in student government without being beholden to any special interest here at the University. My resume of guiding experiences in my life is as follows:

My experiences in both the real world and in student government enable me to find the issues that are important to students. While I do not have the space to list them all, I urge you to read the United Student Alliance platform on Davis Wiki for a detailed list of what I wish to accomplish as your Senator. The most important of these issues that I plan to focus a majority of my time on are increasing the votes needed to raise student fees to a full 2/3rd majority, finding a way to control the spiraling costs of textbooks, and reducing wasteful student government spending.

From my time working in the corporate world I bring with me a host of skills that can be applied for the benefits of students. During my three years working for one of the worlds leading software companies I learned that the personal qualities of Honesty, Integrity, and Responsibility are absolutely necessary in order to succeed. As I was the lead point of contact with JDS Uniphase on a 1.5 million dollar support contract, I earned the trust of my superiors at Oracle. I hope that you all will give me the opportunity to earn your trust as your Senator, and allow me to apply my real world experiences to the benefit of the students of UC Davis. If you can have an Army of One, you can have an Alliance of Two. Vote for me and the United Student Alliance.

And now you know. And knowing is half the battle. Vote for Joe!

Senator Rob Roy was awesome enought to give me his endorsement here at the ASUCD Endorsements. Check out what he has to say about my qualifications. Take it from the Party King of Davis, a man who knows experience when he sees it -Joe Harney