UC Davis Professor Joshua Clover sparked an international controversy in 2019 while proving to be unwilling to withdraw his visions about "cops who need to be killed". Aggie columnist Nick Irving combined Davis Police officer Natalie Corona's 2019-death by murder and Clover's long-standing "rioting visions" about the "bad police killing black people and police officers themselves need to be killed or, as institution, abolished". Clover never made a secret of his convictions and among (his) UC Davis students his opinions were and are also well known.

Couple of highlights at the conclusion of the article:

The column of Nick Irving, very obviously tapping into a nation-wide sore spot about the conception and works of the institution of the police, got and gets a lot of media attention.

2019-Quote UC Davis Professor Joshua Clover, responding to years earlier made comments on cops "who [in his opinion] need to be killed":

“On the day that police have as much to fear from literature professors as Black kids do from police, I will definitely have a statement,”

The university’s chief marketing and communications officer Dana Topousis commented on this:

“Public statements like those made by Professor Clover are accorded a high level of protection under the First Amendment.,”

“All cops have ever done is try to put me and my friends in jail. I mean, when they’re not killing black people. Honestly I don’t see where they find the time.”

More coverage: (links available, not chosen, please add your own if you find more)

The Aggie with Guest Opinion

"UC Davis as issued a statement “condemning” Clover for his violent, anti-police rhetoric, but that doesn’t mean that he’ll be losing his job. When asked if he might be fired, a UC Davis spokeswoman said: “Public statements like those made by Professor Clover are accorded a high level of protection under the first amendment.”

"UC Davis police Chief Joe Farrow called Clover’s comments “disappointing.” Farrow said he had heard about the comments in previous weeks, but said no context was given.

“Our officers are dedicated professionals who have and will continue to rise above calls for violence against them,” Farrow said. “Nonetheless, it’s regrettable they have to endure such vile hatred. I always try to remain positive, and we are keenly aware of what’s going on in the nation with the perception of law enforcement. We try to understand the criticism and build upon that. It’s a reminder to myself that there’s a lot of work to be done.”"

Harsher words coming in a new week, the week of March 4, 2019, the California Police Chiefs demand investigation and firing of Joshua Clover if he indeed made the hate statements.

One week later, March 13, 2019, 10,000 signatures are gathered calling for firing Joshua Clover. In response, Joshua Clover has been putting his foot down, giving Fox40 exactly the same reply he gave them two weeks ago (watch movie clip).

On March 14, 2019, Joshua Clover opened up his Twitter account again, but he removed all his older tweets, and started with 75 tweets of March 2019: 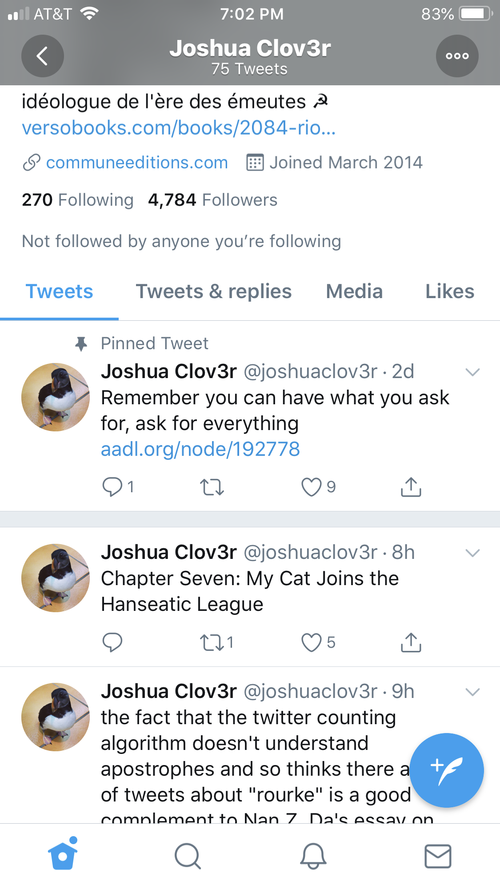 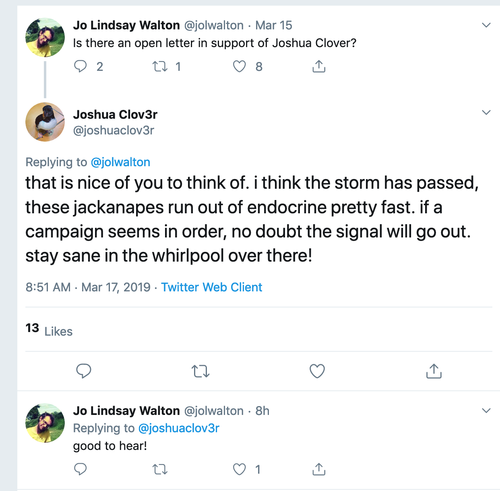 Breaking news on Friday, March 29, 2019, in short UC Davis is not going to take any legal action: First Amendment above all: 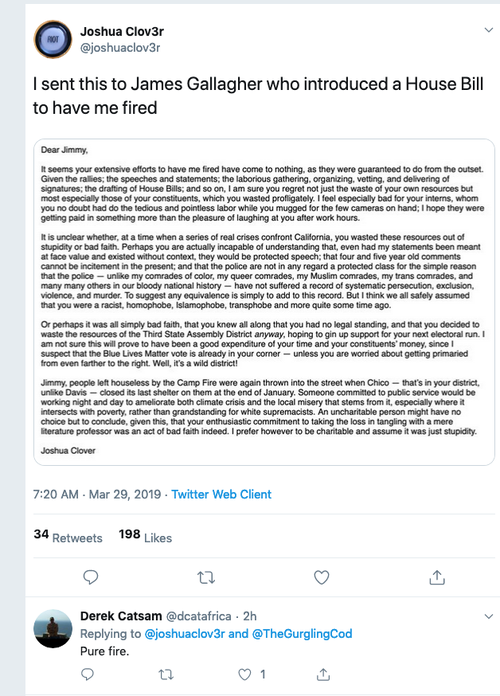 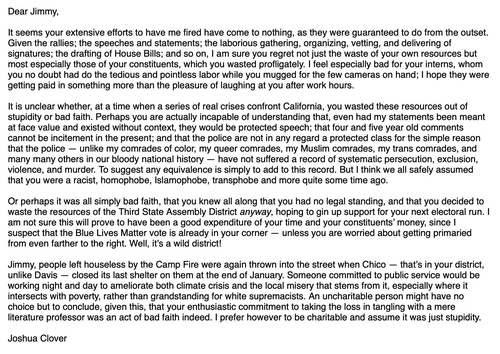 April 10, 2019, Initiator Nick Irvin comes with a review and evaluation of recent developments.

On the same day, the day the first photo of a black hole was premiered to the world, but on the "other" side, Joshua Clover just continues in the same line as always: 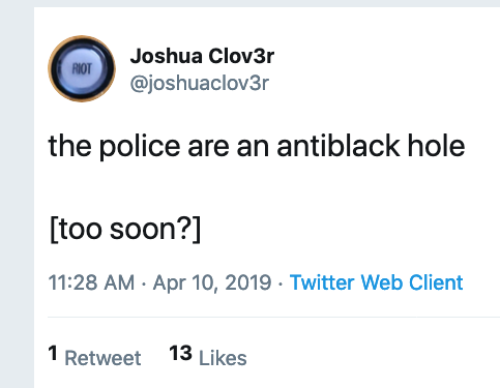 2019-03-06 09:09:31   I am utterly stunned. Just randomly surfing the internet about him again, clicking an older YouTube interview with him, to see all recent thumb downs and inflammatory comments...

The Davis Wiki is not much of a mirror of what is going on, not many people involved with Davis Wiki?

I recently wrote: it seems unfair, his whole life reduced to this one thing, when Cameron added the new part to his personal Wiki page. But it seems true anyway: his whole life ís reduced to this one thing. The comments and thumb downs are not going away. It’s mind boggling. What was he thinking responding in 2019 like he did? Is this a man on a mission? And if so, what’s his mission? Somebody should interview him in person, because clearly, else, the guy has just signed his way out of everything. —

Edit: keeping it simple: (at least I tried) - I have made a follower request.

Edit 2: my follower request was denied, status changed from “Pending” to “Follow” again, I tried one more time.

Edt 3: Another denial from Joshua Clover, Twitter. he doesn't want me as a follower and he doesn't want my question. Denial is communicating, too. Professor Clover, if you are reading this. Know who you are denying. I mastered with honors at Utrecht University on communist writer and artist, Peter Weiss's most famous book, "Die Ästhetik des Widerstands", because I loved and love his work. 😊

Peter Weiss, The Aesthetics of Resistance 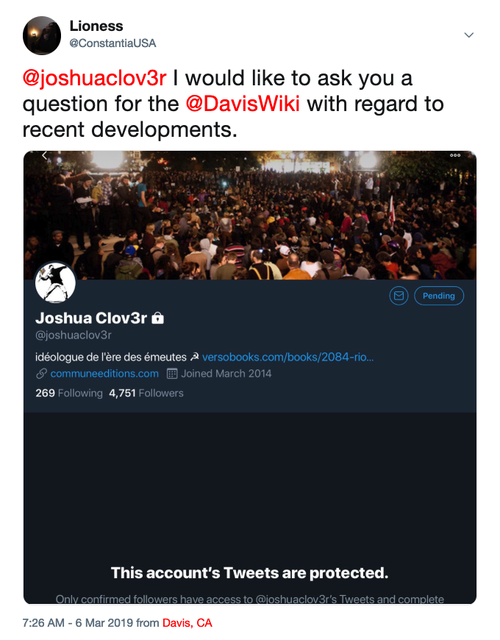 Edit 4: I am blocked by Joshua Clover on Twitter, obviously he didn’t like my repeated follower request. Strange behavior for a man who likes the idea of the power of resistance to the people. If there’s one person in the world who would give him a fair shot, it would be me.

John Lennon, Power to the people 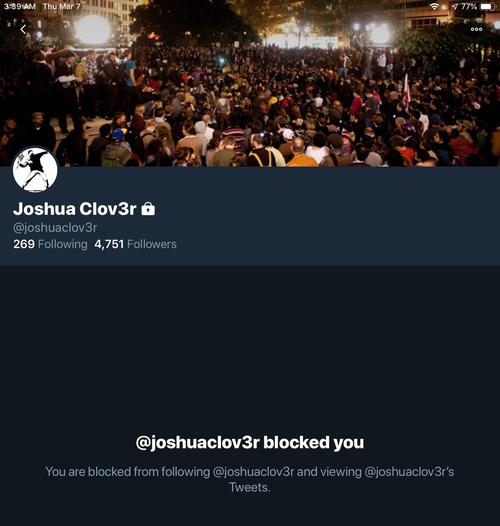 Yeah, sorry, but this really is mind-boggling to me, think about it: 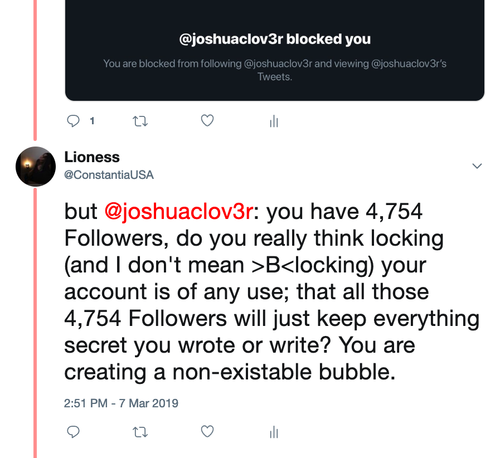 2019-03-14 22:30:24   This comment and screenshot is explicitly in my own name: - and if Joshua Clover really loves resilient people, he should love me too. But instead, he blocked me. Tell me, is that what you would expect? 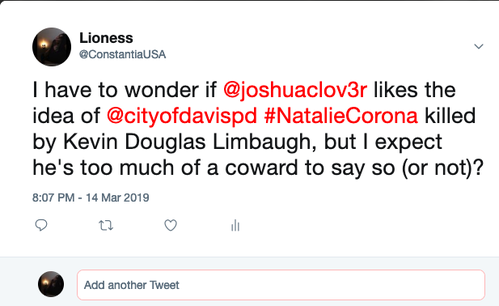 2019-03-22 16:05:41   I was in the DDR when the Wall was still standing, two times even. It was very intimidating, very strict border control, communist cops everywhere. There was no freedom there, or you must describe it "freedom" protected within and because of walls. And communist cops were protecting that "freedom". I think Joshua Clover is clearly idealizing communism. My 50 cents. —ConstantiaOomen

and remember: dressing up desperate valorization of the police and anti-communism with hit-piece soggy-bread writing on the community Wiki sure is a solid way to try to be a cop online!

Wiki editor CO (certainly not a "right orientated editor") listened to the one interview Joshua Clover gave, and this is her personal recap, please feel free to add your own impression and recap:

The interviewer didn't dare confront Joshua Clover with the name Natalie Corona and was overall overcautious, respectively, in worship as a god in approaching the professor. Joshua Clover did declare that of course he didn't advocate violence and that he never meant that cops literally should be killed. In his 2014 tweets that caused great consternation in 2019 he was responding in outrage" like everybody with a sane mind" to the death of Michael Brown. But he stuck to his vision that the police as institute should be abolished. How society should look like without police and what the alternative should or could be, remains completely unclear and the interviewer never asked about it. Clover seems very convinced the police overall is prejudice towards black people. He said that when asked people whether they have had to deal with the police in recent years, the answer always is either option 1 or option 2:

1: "Yes, my car was broken into and I wanted to file report (against "black crime"?)", this answer always by white people, and

2.: "Yes, my nephew was arrested for drug possession", this answer always by black people.

No searchable sources were mentioned.

Furthermore, Joshua Clover declared that not once UC Davis's Board  has contacted him about recent developments, and at the end he said he was convinced that "this too shall pass." The interviewer ended up asking about the best anti-cop songs that Joshua Clover knew. Joshua Clover got very energized and enthusiastic and mentioned a ton of anti-cop songs he liked best.

I would like to apologize in advance for my "hit-piece soggy-bread writing" language, we are not all California born and bred, poetic and extremely, god-like, linguistic geniuses like Joshua Clover.

2020-05-30 21:27:25   May 2020, I do want to clarify something. Though I still strongly reject Joshua Clover's tweet about "Cops need to be killed", I am starting to comprehend where Clover is coming from; from the "black angle" of this all. With this George Floyd tragedy - that sickens me, like the rest of all decent Americans and world citizens - I understand better and better where the hatred against police is coming from. I can also make this understandable, or so I think: in the Netherlands where I come from, all this has never been a problem: black people are not treated differently by the police than white people. It took some time for me to realize that in the United States, this is different. And yes, that should stop immediately, no "waiting" any longer. This is 2020! —ConstantiaOomen