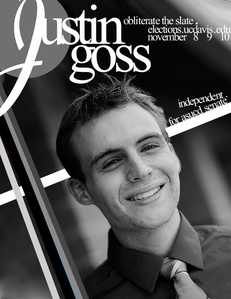 Justin Goss was the only independent candidate running for ASUCD Senate in the Fall 2011 election. He won a seat by garnering the most number 1 votes of the election... and also manged to get the most lowest votes (making him the Most Hated Person on Campus for that election).

My name is Justin Goss, I am running as an independent candidate for ASUCD Senate this Fall. As a fourth year political science, and philosophy double major, Davis has given me three amazing years, and I can think of no better way to give back to the university than by representing you, the students as your senator.

This is an amazing campus with numerous offerings, but many of its resources fly under the radar, and limit the study body’s access to them. It is the role and responsibility of your student government to utilize the campus’ resources and bring them to the fore; something the current Senate, has failed to do. I want our Senate to make meaningful changes, and in turn be meaningful to every single Davis student. Platforms:

THE UC DAVIS 60% INITIATIVE: Our University determined it would reduce its lighting energy expenditures 60% by 2015. This is a huge undertaking, and I believe ASUCD should have a hand in seeing it done. I will work with the office of Vice Chancellor John Meyer to ensure ASUCD facilities are as energy efficient as possible, and comply with UC Davis best environmental practice standards. The Initiative would not only reduce Davis’ carbon footprint, but would also serve as a model to other institutions who want to attempt the same thing. UC Riverside is already considering taking “The Davis Challenge”

EXPANDING OUR CAMPUS RADIO STATION: KDVS (90.3) has been facilitating the Davis music scene since 1964 and is a source of pride for both the town and university. The station runs one of the only non-profit student run record labels in the country, organizes performances both on and off campus including Operation Restore Maximum Freedom, and broadcasts Davis’ sports teams over the airways. I am working with General Manager, Neil Ruud, to ensure the station meets its revenue totals so it can continue providing these services, and go further; building a brand new recording studio for student use, and a new radio tower.

IMPROVING STUDENT ADVOCACY: With our university’s close proximity to Sacramento we as students have a unique ability to influence our state legislators. In the midst of the recent fee hikes and tuition increases, our ability to advocate for ourselves as students has never been more vital. To ensure we are heard I will work with the University Affairs Office, as well as independent organizations like CALPIRG and the Davis College Democrats, to allow voter registration areas within the freshman dorms.

HELPING STUDENTS SUCCEED: The Student Academic Success Center offers several invaluable resources including academic advising and tutoring. Their tutoring services are a good alternative to standard office hours as many students have schedules which do not permit them to attend their professor’s office hours. Additionally, it can be more helpful to have a peer tutor you in a difficult subject than a Professor or TA. By partnering with Tandem Housing I hope to provide additional resources to the Center so they can improve the services they offer and hire more student advisors

Slogans: Obliterate the slate; Anyone can be bold, you should vote independently.