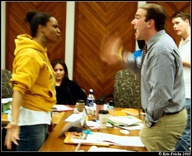 Kahliah Laney was sarcastically dubbed the most chill person involved in ASUCD (okay, so she just says "chill" a lot). She was known for getting into screaming matches during ASUCD Senate breaks with former Senator Donald Cohen-Cutler.

She is a former chair of the Internal Affairs Commission of ASUCD, but she resigned in February 2005. She had a tendency to slam the door of the Mee Room on the way out of Senate meetings.