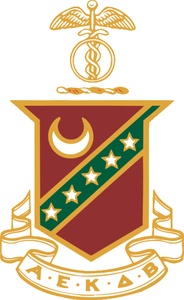 Kappa Sigma (ΚΣ), commonly nicknamed Kappa Sig, is an international fraternity with currently 282 active chapters and colonies in North America. Kappa Sigma has initiated more than 240,000 men on college campuses throughout the United States and Canada. Today, the Fraternity has over 175,000 living alumni and more than 14,250 undergraduate members. It is one of the leaders of all American fraternities in terms of pledges and new initiates per year, service hours, and philanthropic donations. Its endowment fund, founded in 1919 is the oldest college fraternity foundation and has donated more than $6.5 million to undergrads since 1948 and now raises over $250,000 per year.

Kappa Sigmas are taught to live their lives by the Star and Crescent, which are also the symbols of the Fraternity that make up the official badge:

The Star and Crescent shall not be worn by every man, but only by him who is worthy to wear it. He must be a gentleman... a man of honor and courage... a man of zeal, yet humble... an intelligent man...a man of truth... one who tempers action with wisdom and, above all else, one who walks in the light of God.

They also follow the four pillars of the Fraternity: Fellowship, Leadership, Scholarship, and Service. The Star and Crescent is also used as part of the guidelines behind Kappa Sigma's strict no-tolerance anti-hazing policy. The Fraternity takes all allegations of hazing very seriously and routinely revokes charters from guilty chapters which can be as old as 130 years.

The Beta Phi chapter of Kappa Sigma is an active fraternity at UC Davis.

Kappa Sigma has been one of the oldest fraternities at UC Davis and has a large and active alumni group.

The Kappa Sigma fraternity has a long history. They trace their lineage back to a possibly mythical organization called "Kirjath Sepher" at the University of Bologna founded by Manuel Chrysoloras circa 1400. This order is said to have been a secret society formed to protect students against corrupt government and university officials. Kappa Sigma was founded in its current form in 1869 at the University of Virginia.

Through the guidance of the fraternity's four cornerstones; Fellowship, Leadership, Scholarship, and Service, Kappa Sigma has excelled and become one of the largest fraternities in the nation. Kappa Sigma is currently the leader of all American fraternities in terms of pledges and new initiates per year, service hours, and philanthropic donations. Along with this, the fraternity has the oldest continuous endowment fund which has donated $4.5 million to undergrads since its inception in 1919.

The UC Davis chapter of Kappa Sigma once closed its doors sometime in 2006 after losing their on-campus chapter house across from the ARC in Spring of 2005. Sigma Chi moved into their former house after extensive remodeling in Fall of 2005. Kappa Sigma was recolonized on October 20th, 2012. Their current house is on 340 A Street.

2009-03-05 19:28:04   Does anyone know how to elaborate on this organization's "impressive legacy" that is mentioned in the main article? The information we have cited above seems to indicate that their "legacy" consists of racist acts and one suspicious suicide by a member who might have had some form of mental illness... —PaulAmnuaypayoat

2009-03-05 20:53:05   PaulAmnuaypayoat, I am working on it, and will have some history of the Beta Phi chapter uploaded shortly. Those cited media links are from the early 2000's. At that time the Beta Phi chapter had a few bad apples in it that didn't support the values of the fraternity and subsequently, their charter was pulled. —Edward

2009-06-20 14:59:11   I was in the original "bad apple" frat of Kappa Sigma Beta Phi chapter. Believe it or not, YES it was like only 3 or 4 people that were the bad apples and YES those people were subsequently removed from the fraternity. However, by this point, so much damage had taken place that it was hard to fix. After losing the house, many of the "good" members of Kappa Sigma became apathetic about the frat and frat participation and numbers started to dwindle. I can tell you though that they did work very hard to try to save the fraterntiy. However, with only a handful of active members still having hope for the frat, it became easier to just let it go. —UCD3

2009-06-20 14:59:56   Also, I was one of the newer members of Kappa Sigma before the frat shut down. Its good to hear that you guys are recolonizing. I wish that my pledge class had had this kind of determination/help. The doors to Kappa Sig shut my sophomore year and thus ended what could have been great times in an awesome fraternity. I hope that Kappa Sigma survives this time, and lives up to everything that it is supposed to stand for.

"The Star and Crescent shall not be worn by every man, but only by him who is worthy to wear it. He must be a gentleman... a man of honor and courage... a man of zeal, yet humble... an intelligent man...a man of truth... one who tempers action with wisdom and, above all else, one who walks in the light of God." AEKDB

2009-08-26 22:20:32   I was a member of Kappa Sigma, Beta Phi Chapter at Davis from 2001-2006. I extremely enjoyed my experience at Davis and I give credit to Kappa Sigma for that experience. ALL members of the fraternity are still my good friends to this day. I find the statements of Paul quite ignorant and to be honest very insensitive to call a suicide "suspicious" and to speculate on the mental health of a person he has never met. And as far as the racism is concerned, before, during and after, Kappa Sigma has always had a multicultural membership. Including many multicultural leadership figures as high as Fraternity president!