What is a Keg?

A keg is a metal barrel container used to hold drinks. Generally bought for beer, kegs are a mainstay of many drinking parties and binges. It is generally the most cost effective and environmentally friendly way to get lots of people drunk. Kegs have a two way valve in the center of the top of the container that is used for filling, cleaning and tapping the insides.

How many do I need?

A true keg is 31 gallon barrel. However, most people know a "keg" to be the standard 15.5 gallon half barrel. While the 15.5 gallon is the stalwart, smaller kegs do exist. If you're organizing certain drinking games, it might be of interest to know that a keg has 1,097 shots. Generally, most parties have just one keg. If it's going to be a "big" house party you may think of getting two or even three. Fraternities, SOS, and bro parties often have many more since the need is to get lots of people really really drunk. The Yellow House, an infamous party house on University Avenue once had 15 kegs for Picnic Day. Back in the hey-day of SOS, they would fill a U-Haul truck with around 23 kegs for their Airport Party.

These stores both fill keg orders and sell associated accessories. 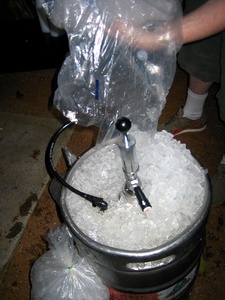 Ice is always necessary with any Keg

Generally, a keg purchaser is buying the beer inside the keg can while at the same time "renting" the keg and tap. You will put down a deposit on the keg (around $50) and tap (~$5-10) which you will get back when you return the items. Some people choose to own keg shells and/or taps. They can either be bought through dealers or "purchased" by simply not returning them for your deposit. Keg owners bring their kegs to the stores listed above to have them cleaned and filled.

Set your keg up in an area you can afford to have beer spilled in. Kegs are messy so it's a good idea to keep them far away from hardwood floors and carpets. Often, the host will keep the keg inside of a garbage can or bucket. A container such as those will capture most of the spillage and provide an area to dump unwanted beer foam. An added advantage is that you can keep the beer chilled by packing ice inside the bucket and on top of the keg.

Hardcore keg aficionados might enjoy owning a Kegerator. These are refrigerators to keep your keg cold and generally improve the keg experience. They can be either modified regular refrigerators or specialized appliances. A huge advantage of kegerators is that by keeping an open keg cold the life of the beer inside is greatly increased. Beer in a Kegerator is usually good for up to 3 months. Non-refrigerated kegs aren't as good a few days after tapping. However, purchasing a Kegerator or building one yourself can be quite costly, sometimes up to $700!

Hosts might consider keeping a pitcher or two near the keg. Besides being able to serve as huge cups for idiots, a pitcher will be useful for ridding the keg of foam and transporting beer to people playing drinking games.

Kegs are the antithesis to BYOB. A host can not generally control access to a keg. This creates dangers associated with having underage drinking. California has what is called the TRACE (Target Responsibility for Alcohol Connected Emergencies) Law which allows the alcohol source to be "traced." Investigating officers will identify where, when, how and who purchased the alcoholic beverage. If you are identified as the source that provided alcohol to minors, you may be fined $1,000 with an additional penalty of 24 hours of community service. While it seems tempting to let everyone hang out in front of the house, be aware that there is now an Open Container Policy in Davis. Even if you are the crazy age of 21 and up, you cannot roam the streets with an open container of alcohol. This includes any street, sidewalk, alley, and highway, off street public parking lot or structure, Cedar Park, Central Park, Oxford Park, and places within 600 feet of primary or secondary schools in Davis. Basically...Be SMART!!!

More party laws and other host information can be found at safeparty.ucdavis.edu

Signs of Alcohol Poisoning *Repeated, uncontrolled vomiting *Slow or shallow breathing - less than 13 breaths per minute or more than 8 seconds between breaths *Cold, clammy, pale or bluish skin *Unresponsive or unable to be awakened

Keg beer is generally associated with the disposable 16 ounce beer cup. Since a keg is generally meant to serve large groups, it is often necessary to go out and buy more cups. These red cups, being made of number six plastic, are recyclable. Alternatives to using plastic disposable cups would include asking people to bring their own drinking containers or supplying large numbers of "real" cups borrowed from friends. If you do use red plastic cups, it isn't too hard to collect them in the morning for washing and reusing before recycling.